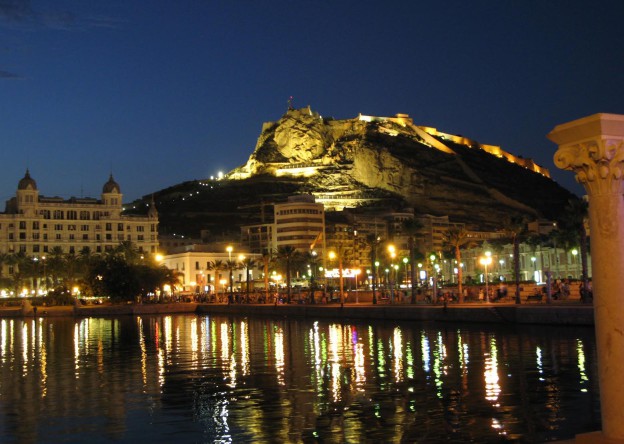 Top attractions and things to do in Alicante, Spain. Alicante is one of the nicest holiday cities in Spain. The city is known for its gorgeous Mediterranean coast, and particularly note the beautiful mountains with the warm and sandy beaches around it. Alicante offers almost everything you can imagine and it is easy to get around. In this post we show you the best attractions and things to do in Alicante city.

We will now show you the best attractions in Alicante for the whole family. A bit of everything for all ages and interests. Have a good trip!

#1 The Santa Bárbara Castle in Alicante

On top of the Benacantil mountain you will find a giant fort. Wherever you are in Alicante, you will see the Santa Barbara Casle 166 meters above the cityscape. The fort has been a prime target for conquest throughout history. Despite constant attacks and destruction, the fort managed through the toughest battles. To the delight of all tourists and history seakers in our time. The easiest way to get to the fort is to either take the train to Alicante and get off in the harbor, or park your car in the large underground parking garage in the harbor. From the harbor there are two minutes to walk to the elevator that brings you up to the fort. 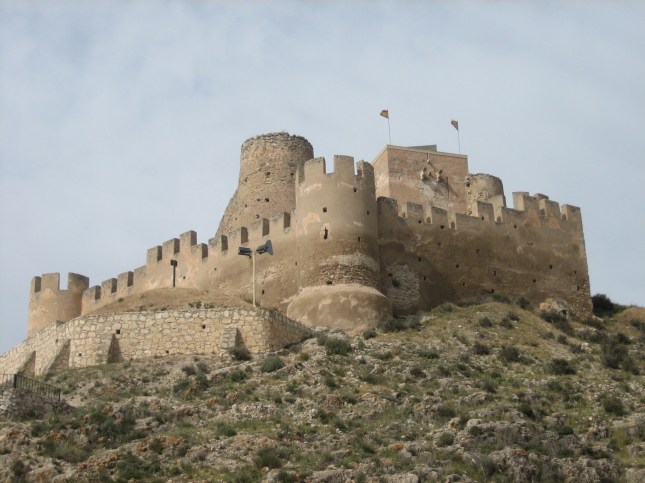 Castillo de San Fernando has been overshadowed by the sister Castillo de Santa Bárbara Santa. Fernando is considerably more dilapidated and overgrown, but you have almost as nice view from here, and you get the area almost to yourself because there is not many tourists that know about this castle. This is a peaceful and deserted place right in Alicante city, with lion statues that look down at the harbor. Castillo de San Fernando is on a cliff a few hundred meters north of the Plaza de Luceros, and you can easily go up there on your own. Recommended! 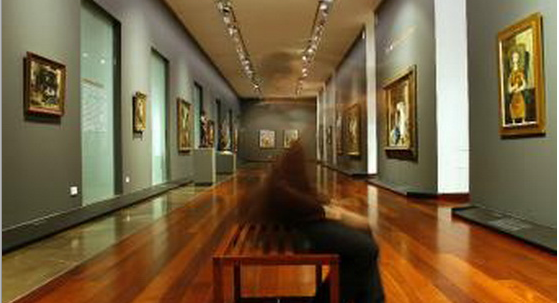 Museo de Bellas Artes Gravina is located in Alicante city north of Plaza Puerto del Mar. It is an art museum housed in the well-preserved 1700 building Gravina Palace, which was once the private residence of the Count of Lumiares. Just north of Plaza Puerto del Mar you will find this classic art museum, located in an old mansion from the 1700s. Here are exhibited over 500 works of art from the Middle Ages up to the 1920s, several of Spain’s most renowned artists.

Alicante’s main church building is Catedral San Nicolás de Bari, which was built between 1616 and 1662. It is located in the old town of El Barrio, in a place where it previously was an Arab mosque. The ground plane is shaped like a Latin cross, and six small side chapels associated with the cathedral’s main ships. Over this concave it turns a beautiful blue dome.

In the center of Alicante, one can not fail to find the city’s lovely promenade “Explanada d’Espanya.” Here you walking on a pattern of 6.6 million black, red and cream colored tiles. On a walk along the promenade you will find restaurants, playgrounds, musicians and countless stalls with handicraft art and souvenirs, and if you want, you can dip your toes in the Mediterranean sea. On the south side you find the Puerto Viejo with hundreds of boats of all sizes, and on the north side outdoor restaurants and bars. It’s pretty much always a festivity at Explanada España. 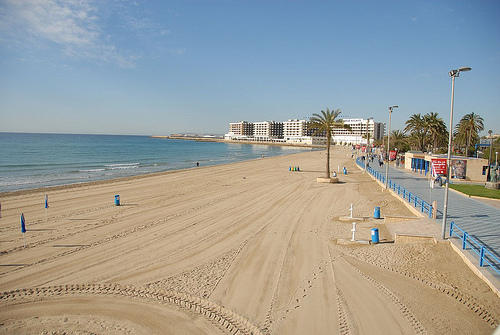 Costa Blanca is known for its many beautiful beaches. Several of them are situated near Alicante. Closest we find the popular Postiguet, which practically is very close to the city center – just east of the marina. Along the beach you can walk on an idyllic, palm adorned promenade. The seawater at Postiguet has great quality and got the Blue Flag. On the beach you will find sunbeds available and seaside resort is also suitable for water sports. The many blue and white umbrellas are the beach’s trademark.

#8 Eat a delicious Paella in Alicante 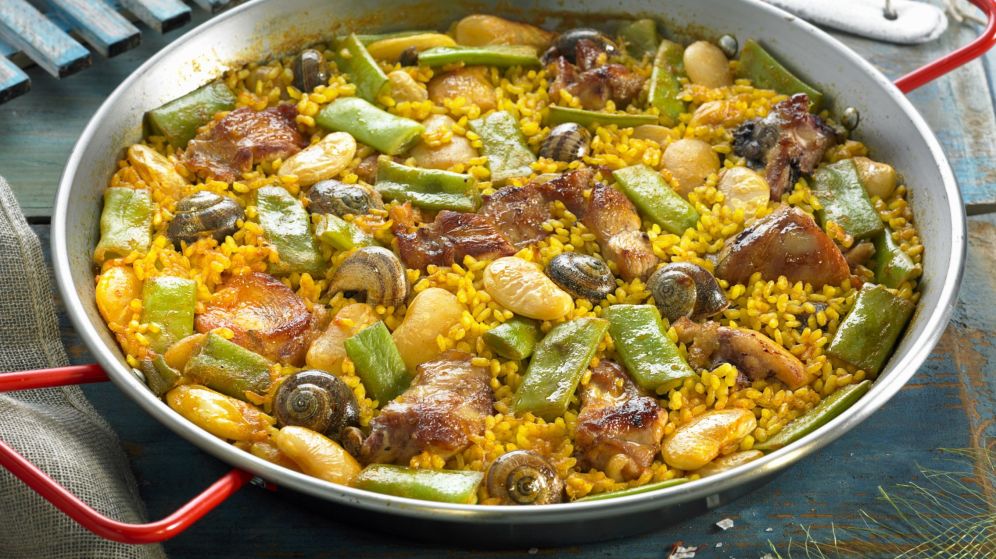 Alicante and Valencia provinces are known for its excellent rice dishes called paella. This is a traditional dish containing rice, some vegetables, shellfish, shells, squid, chicken or other meats depending on the type of paella you order. It’s a paella being made with squid and ink of the squid. This may look a bit nasty and strange, but is stunningly good. Many people eat Paella with little ali oli (mayo with garlic). There are many restaurants in the center of Alicante which has Paella as a specialty. Read more about restaurants in Alicante 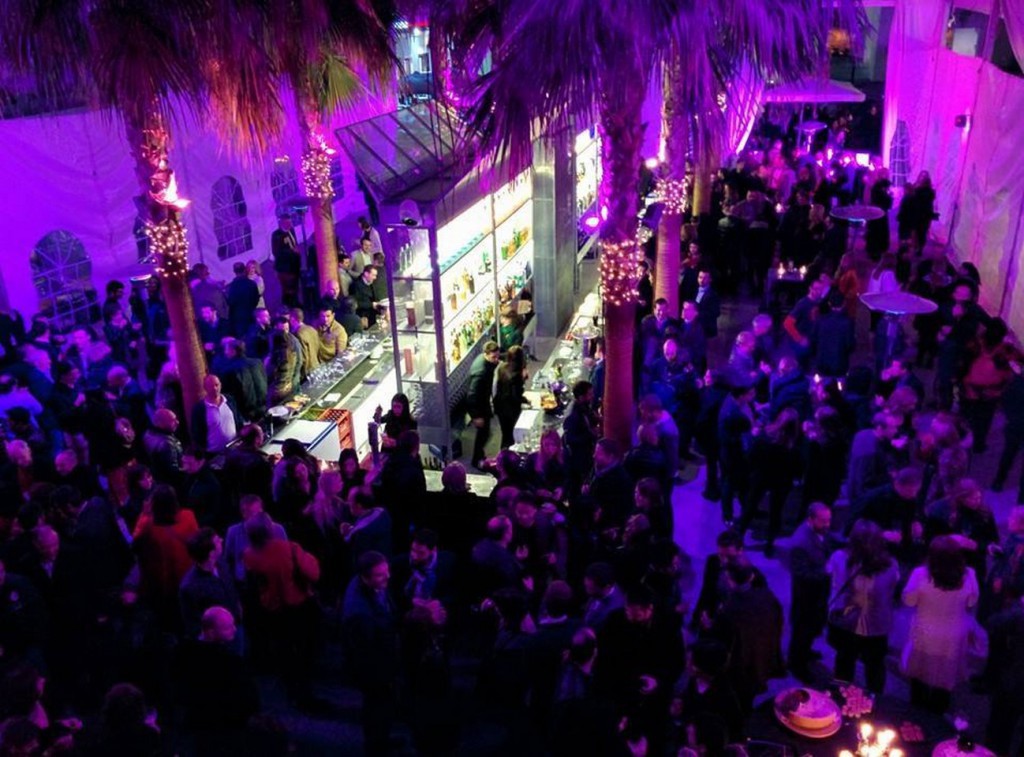 In Alicante you will find various areas and places where you can experience a fun and social evening on the town. Some of the places we recommend are in the street La Avenida de Ramón y Cajal, El Barrio and the harbor. Nightlife in Alicante have slightly different hours and drinking habits than in rest of Europe. The bars are often open to clock 04:00-05:00 and discos can be open late into the morning hours. Prices for a drink may vary from 5 to 10 Euro. Read more about nightlife in Alicante 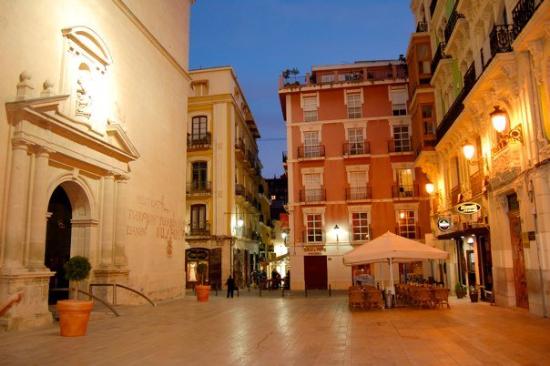 If you want to visit the best place in Alicante in the evenings, the old town El Barrio is the perfect place. Here there are a number of good bars. Built under the protection of Santa Bárbara, streets of Alicante’s historic El Barrio you will find around Ayuntamiento (City Hall) and San Nicolas Cathedral. El Barrio has a reputation as “the bad part of town.” Large government initiatives was made to get district as it once was. They refurbished the colorful houses and give the pleasant plazas back to their former glory. Alicante’s oldest neighborhood has been restored and is now a place to visit. Many people also like to shop in Alicante at night. Since Alicante is both a tourist and university town, there are many shops that hold up at night. There are also cinemas and discos you can have fun in. Along the coast there are numerous restaurants with gorgeous views and exceptional food and dining. You’ll find something that suit all budgets. It is also popular to stop by one of the many ice cream shops.

At Alicante’s Museum of Modern Art, MACA (Museo de Arte Contemporaneo de Alicante), you can see art from the 20th century of great artists such as Picasso, Cocteau, Miro, Dali, Max Ernst and Francis Bacon. The museum building itself is worth a visit, it is listed in the 17th century in baroque style and is a brilliant example of Alicante Baroque City Architecture. The building has also previously served as a granary, prison and school.

Map of attractions in Alicante

Now a day’s it is very popular to rent a car on your holiday in Alicante. The majority choose to pick up a car at Alicante Airport. With car rental you and your family have the opportunity to take pleasant day trips in Costa Blanca, take exciting excursions at your own pace and not be dependent on public transport. By comparing prices of car rental from several companies, you can save a lot of money. Check your prices on car hire in Alicante now.