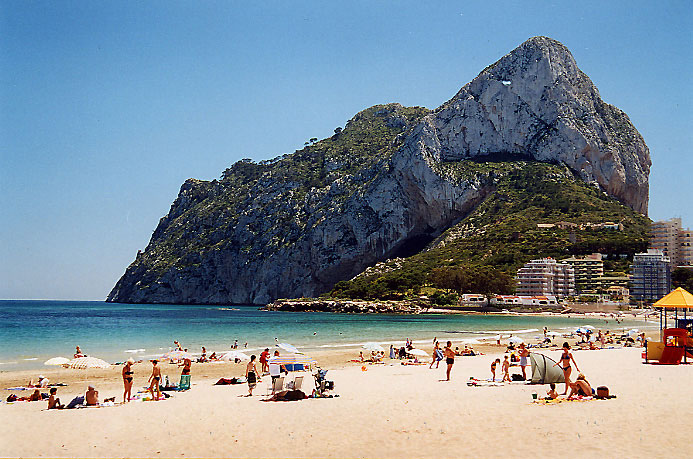 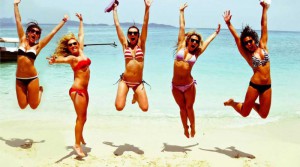 Guide to the best beaches in costa Blanca. 1987 was Europe’s Year of the Environment, and the year starting the campaign “Bandera Azul” (Blue Flag) in Spain. FEE Federación Europea de Educación Ambiental conducts annual inspections by Spain’s beaches, and deploys the blue flag at all beaches that meet the criteria for environmental protection and good service offers. On the Costa Blanca you will find some of the world’s best beaches, and the White Rim has no less than 200 kilometers of beaches and they are all together in Alicante Province where you can enjoy lazy days in the sand in the relaxing climate of the Mediterranean. Here we will give an overview of the best beaches on the Costa Blanca, all equipped with the blue flag. Read more about Costa Blanca beach guide

The place is also said to be a favorite diving paradise. Below sea level can enjoy a wonderful flora and fauna. There posedonia, squid, starfish and a variety of fish and rock formations often covered in algae and posedonia. If you choose to dive recommended Cala Andragó, Cap d’Or and Laberinto area. For snorkeling recommended Cap Blanc and Playa del Portet. 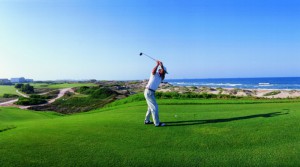 Golf courses Costa Blanca is a favorite destination for golfers from all over Europe, and not least for us Scandinavians. The mild climate, the excellent infrastructure and a growing number of golf courses to choose from, is among the things that draw droves of golf enthusiasts to “the White Coast”. The climate is perhaps the main reason why golfers from all over the world flock to the Costa Blanca to play golf all year round. Spain is regarded today as one of the world’s premier golf destinations, and for many this favorite country. Acceptable price niva, good courses and not least well-developed infastruktur means a lot. On the Costa Blanca are the most golf courses around Alicante. Thirteen of which are built in a radius of just a few mil. Read more about 10 top golf courses on the Costa Blanca 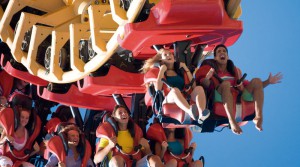 Animal and amusement parks Costa Blanca coastal strip Costa Blanca bursting of amusement parks and zoos for adults and children and here you can find fun diversion from the sun, beach and shopping. Costa Blanca theme parks offer everything from prehistoric creatures via crocodiles to real adrenalin rush rides. You can see the water show with dolphins, or why not take a dip with a sea lion? Or how about a safari, while antelopes, lions and tigers frolic on all sides? Read more about theme and amusement parks in Costa Blanca 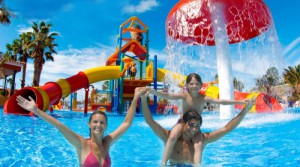 Now a day’s it is very popular to rent a car on your holiday in Costa blanca. The majority choose to pick up a car at Alicante Airport. With car rental you and your family have the opportunity to take pleasant day trips in Costa Blanca, take exciting excursions at your own pace and not be dependent on public transport. By comparing prices of car rental from several companies, you can save a lot of money. Check your prices on car hire in Spain now.

Cities and villages in Costa Blanca

Costa Blanca or the white Spanish coast as it is called is a 200 km long coastline of the province of Alicante in eastern Spain. Costa Blanca extends from Denia in the north to Pilar de la Horadada in the south. We will here give some of the finest cities and villages on the Costa Blanca coast.

Alicante city is capital of the province with the same name and located in southern region of Valencia. Alicante is one of the cities that are fastest growing in Spain. The economy is based on tourism, wine production and export of fruit and olive oil. Alicante is great for the Mediterranean and has a bit of everything to offer. In the north we have San Juan, the city’s own “beach resort”, here we find a long beautiful beach, tourist apartments, golf course, restaurants and bars. Read more about Alicante 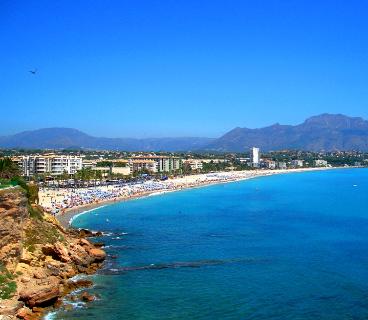 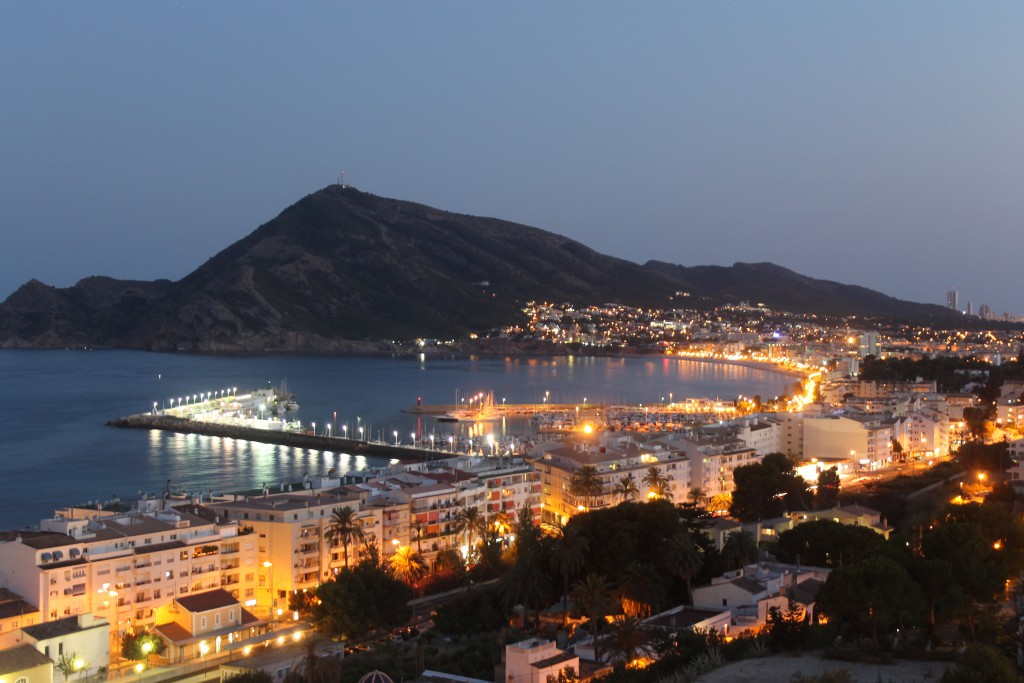 Altea is the most charming Spanish city I’ve visited! An elongated boardwalk, whitewashed houses with flower pots, narrow cobbled streets, small arts and use shops, ice cream parlors and outdoor restaurants, – are just some of the Altea has to offer. Any number of steps in the narrow quaint streets, leads you from the seafront and up to the viewpoint of Altea. Read more about Altea 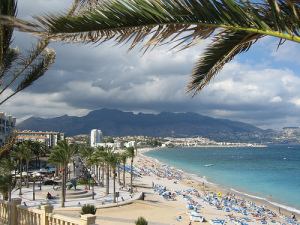 Alfaz del Pi is famous on the Costa Blanca for having more full-time foreign residents than Spanish residents.
There is a great mix of over 90 different nationalities living in Alfaz and this makes it a great tourist destination because of its variety. Of course the weather in Alfaz del Pi like the rest of the Costa Blanca is superb with hot summers attracting the tourists but also the winters are mild making it an ideal location in which to retire to. Read more about Alfaz del Pi 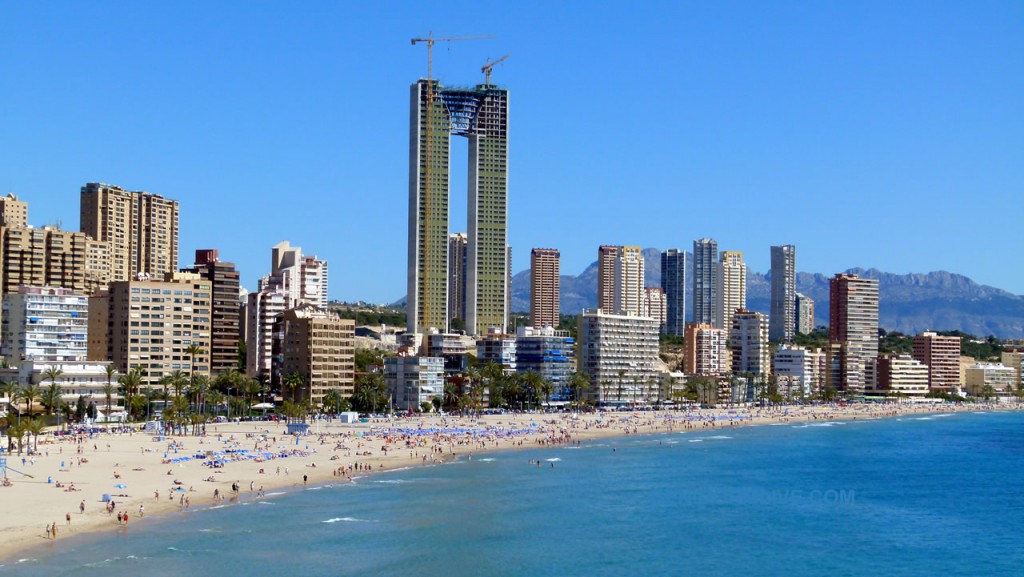 Benidorm was built around the small mountain crag that we know today as the “old town”. During the 1500s the city was attacked by pirates, it meant that much of the town was destroyed and the inhabitants fled. In the 1600s, the city was rebuilt, and in 1665 was a major turning point for the city, when the city got fed freshwater through channels from Polop and Alfaz del Pi. The new supply of water gave residents of Benidorm opportunity to engage in agriculture, and it was cultivated olive, orange and lemon. Read more about Benidorm 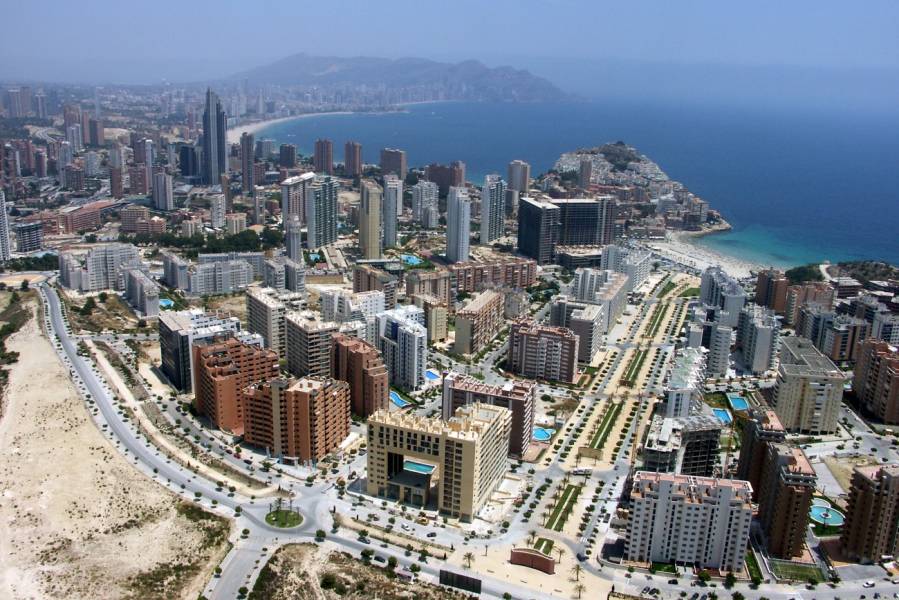 Finestrat Spain La-CalaFinestrat in Spain has experienced many cultures throughout history. Finestrat has perhaps the oldest settlement in the area. Archaeologists believe they have evidence that it was resident people here already more than 20,000 years before Christ. Here was was one protected by the mighty Puig de Campana, had an amazing view of the entire area and had access to important water sources from the mountain. In Finestrat we find the oldest Iberian settlements in the province of Alicante. 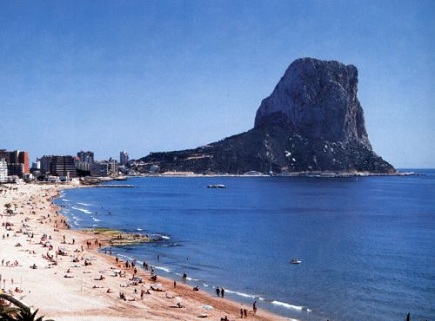 The most famous landmark on the Costa Blanca is the rock at Calpe. Visible far avstad from both north and south where it is situated on a promontory out at sea and extends 332 meters above sea level. Pisco’s stone parts coastal strip in half and is an easily accessible hiking destinations. How about taking the great tour first and then enjoy one of all friendly bars in Calpe afterwards? Read more about Calpe 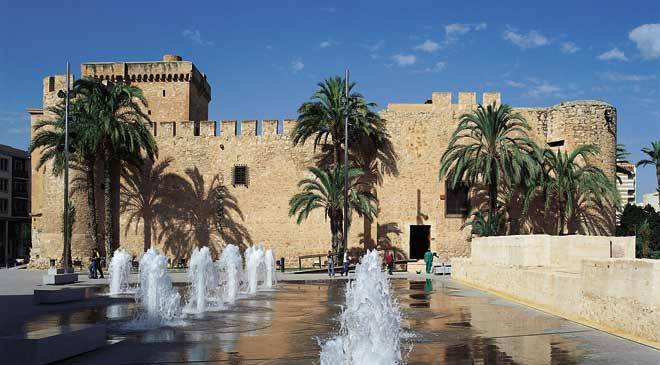 Take a trip to Elche Palm Sunday and experience the celebration of this palm the city. Elche is one of the few cities in the world that has two cultural sites on UNESCO’s World Heritage List. In 2000, palm forests part of the World Heritage List, and in 2001 the famous game about mystery in Elche. The city with white palms, plaited palm leaves, and the many palm forests, has one of the most famous celebrations on himself Palm Sunday. Read more about Elche 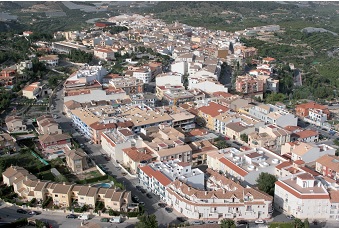 Today La Nucia the city’s fastest growing Pais Valencia. According to Enric Pastor, press chief of the municipality, is the cause of La Nucia popularity to find in these facts: “Pueblo’n has low crime, good schools, well-developed healthcare system, highly advanced sports and cultural activities and a good coverage for assistance to the elderly.” “We have two main groups of people who move here,” says Enric Pastor: “young couple around 30 years and older from 65 years. We do what we can so that people will feel comfortable here, “he says. And it’s true. At the same ten years, when the population doubled, the municipality built new health center, police station, a new youth house, a large concert hall and a large modern sports facility. 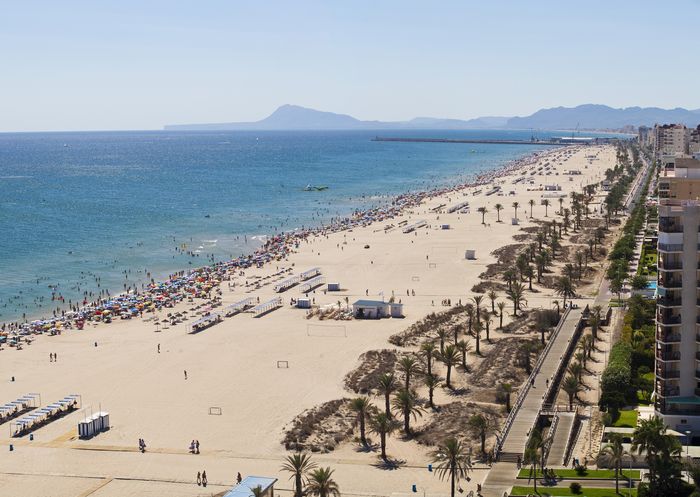 When we whisked off the highway north towards Valencia, we certainly sign with Gandia, but we have it usually too busy to stop. perhaps we are going to drive to Valencia or Barcelona; – Or; – Maybe this is the first leg of his annual address flight home to the old country. But what reason now: we breed quickly past Gandia just as the hare in Alice In underworld. Gandia has both great beaches, fun town and a shady paseo with a good selection of boutiques, restaurants and cafes. Here are also a number of interesting castles and palaces. Read more about Gandia 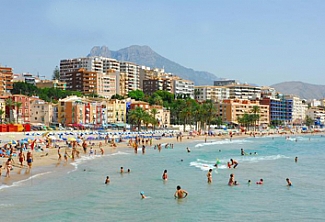 Villajoyosa is especially known for its chocolate. Valor, considered one of Spain’s best chocolate brands, are produced here. As the rest of the coast, tourism is also an important source of income. One of the most popular tourist attractions is the Gothic Catholic church, with baroque altarpiece. Villajoyosa is also very famous for its fiesta edition of Moros y Christianos. It has added so much to this celebration that the fiesta is declared as an event of international interest for tourists. Read more about Villajoyosa 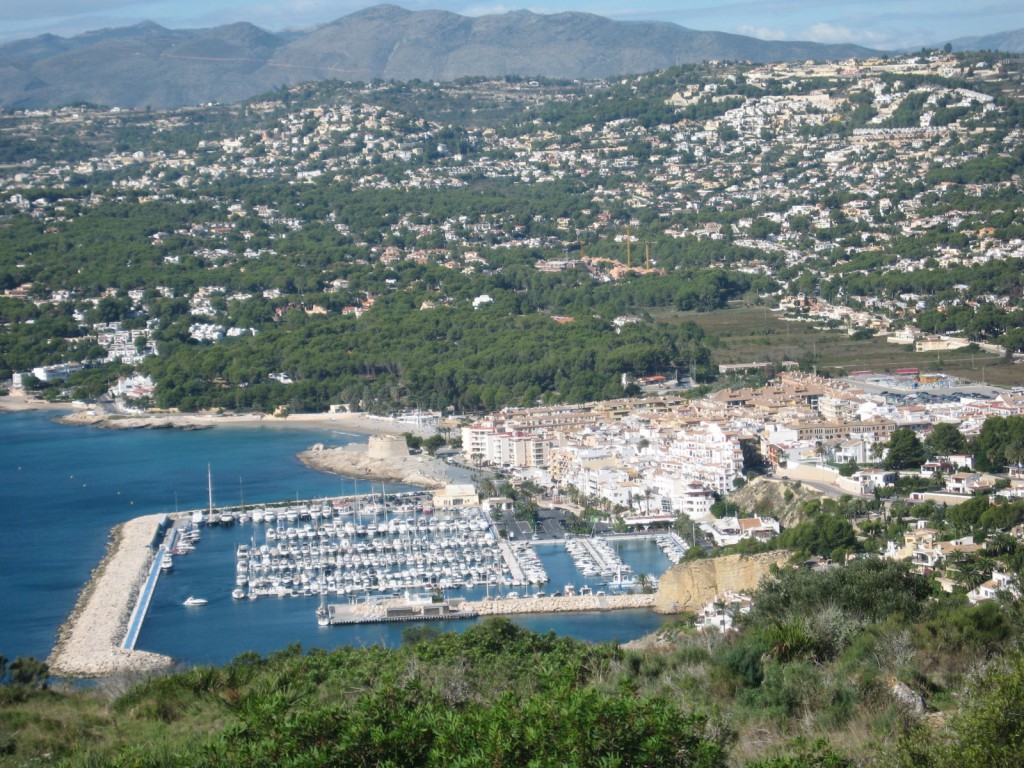 Moraira is quite midway between Valencia and Alicante. If you drive from Marina Baja, you can choose the coastal road from Calpe. Here is charming small places in a row. The place is characterized by beautiful gently sloping sandy beaches and sheltered little squares, an exclusive marina, an excellent variety of excellent restaurants and bars, as well as many shops. “War” between the Moors and Christians are by far some of the best you can see during a local fiesta. Here subscribed an invasion by the Moors, while fireworks sizzles over the water and then explodes out into the ocean. Read more about Moraira

White of the salt and brown by the sun said the coat of arms of Torrevieja. The town lies just south of Alicante and has a long and interesting history with ingredients such as salt lakes, ancient towers, boardwalks and sandy beaches. There is much to experience in the area. There are many possibilities either you move on foot, by bicycle or by car. Torrevieja situated on the coast and is surrounded by three beautiful and large salt lakes. The city has an area of ​​72 square kilometers and about 100,000 inhabitants in the winter, and five times as many in the summer. Torrevieja can be called an island because three channels separates the city from the country. Read more about Torrevieja