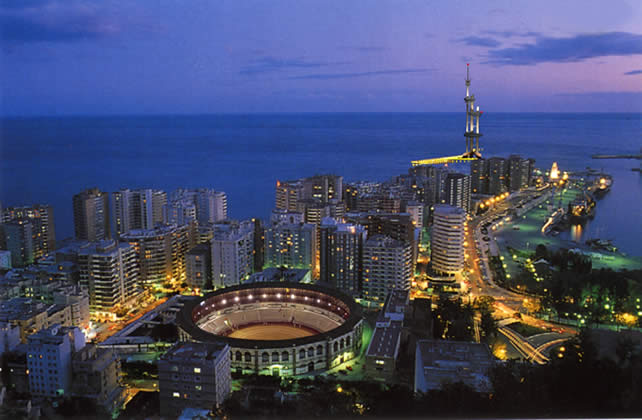 Costa del Sol or the sunny coast of Spain as it is called stretches from the Rock of Gibraltar to the Sierra Nevada Mountains. Costa del Sol is known for its fine beaches, the pleasant climate, good golf courses, and a wide and good entertainment scene no matter which city you choose to stay in. The coastal strip located in the region of Andalucia which covers 17% of the land area in the whole of Spain. 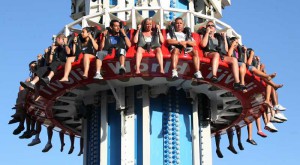 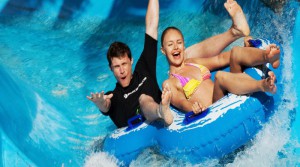 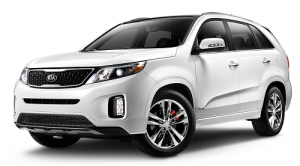 Now a day’s it is very popular to rent a car on your holiday in Costa del Sol. The majority choose to pick up a car at Malaga Airport. With car rental you and your family have the opportunity to take pleasant day trips in Costa del Sol, take exciting excursions at your own pace and not be dependent on public transport. By comparing prices of car rental from several companies, you can save a lot of money. Check your prices on car hire in Spain now.

Cities and villages on the Costa del Sol

Malaga in Spain, well loved for sunshine and calm days, has been a favorite holiday destination for Europeans since the 1970s. More and more people explores the major cultural and historical diversity that makes Malaga city so unique. There is much more to experience than great beaches and nightlife. The warm climate makes it a wonderful place all year. In August, the summer’s annual festival, bringing the city to life with a ten day festival with flamenco and street parties, although this is when the summer sun is at its most strongest. If you prefer to escape the heat, autumn and spring very comfortable here. Read more about Malaga

Sevilla is located in Spain, in Andaluía. Andalusia has a pleasant climate mostly year round, but in the middle of summer it can be stifling hot. The city is, however, a sight at any time of year. As Spain’s fourth largest city, is the one major city to work, but with a historic center that gives you the feeling of being in a small medieval town. Here, the streets are narrow, very narrow if you arrive by car. The Arabic-inspired buildings with their little porches and rich decorations framing the cobbled streets and squares. And are you accustomed to the Italian squares that reveals itself around every corner, you’ll find the same thing in Seville. Sevilla was one of Spain’s richest cities for around five centuries ago. This is also reflected in the city’s architecture and stunning embellishments. Here were several artists and writers born and their works can be seen in this beautiful city. Read more about Sevilla 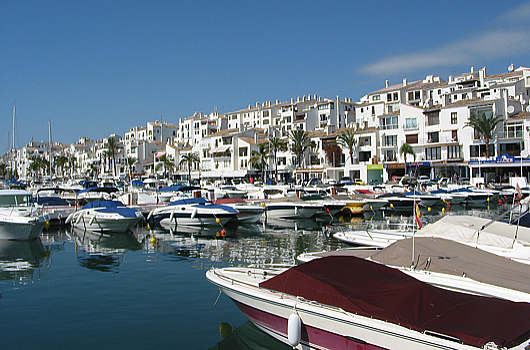 Marbella is a city and municipality in southern Spain, belonging to the province of Málaga in the autonomous region of Andalusia. It is part of the region of Costa del Sol and is the headquarters of the Association of municipalities in the region, it is also the head of the judicial district that bears its name. Marbella located on the Mediterranean, between Malaga and Gibraltar at the foot of Sierra Blanca. The municipality covers an area of ​​117 square kilometers (45 sq mi) junction of highways on the coast, which is the main entrances. It is one of the main tourist towns on the Costa del Sol and throughout most of the year is an international tourist attraction, mainly because of its climate and tourist infrastructure. The city also has significant archaeological heritage, several museums and performance spaces, and a cultural calendar with events ranging from reggae concerts to opera performances. Read more about Marbella

Puerto José Banús is a marina on the outskirts of Marbella, on the Costa del Sol in southern Spain. The marina was built by the local businessman and property developer José Banús and opened in May 1970. It is known for its luxurious feel, with expensive boutiques and frequent touches of large yachts belonging to some of the world’s richest. Along the coast, the range is huge, from old tourist ghettos to luxury harbors for celebrities, sheiks and royal. The area between Puerto Banus and Marbella is known as the “Golden Mile”. Here is the apex of earthly happiness to have a giant fancy yacht in the harbor. In Puerto Banus, it’s all about being seen. A good idea is to combine market in Puerto Banus on Saturdays to walk, inspect and take lunch in the marina. Read more about Puerto Banús 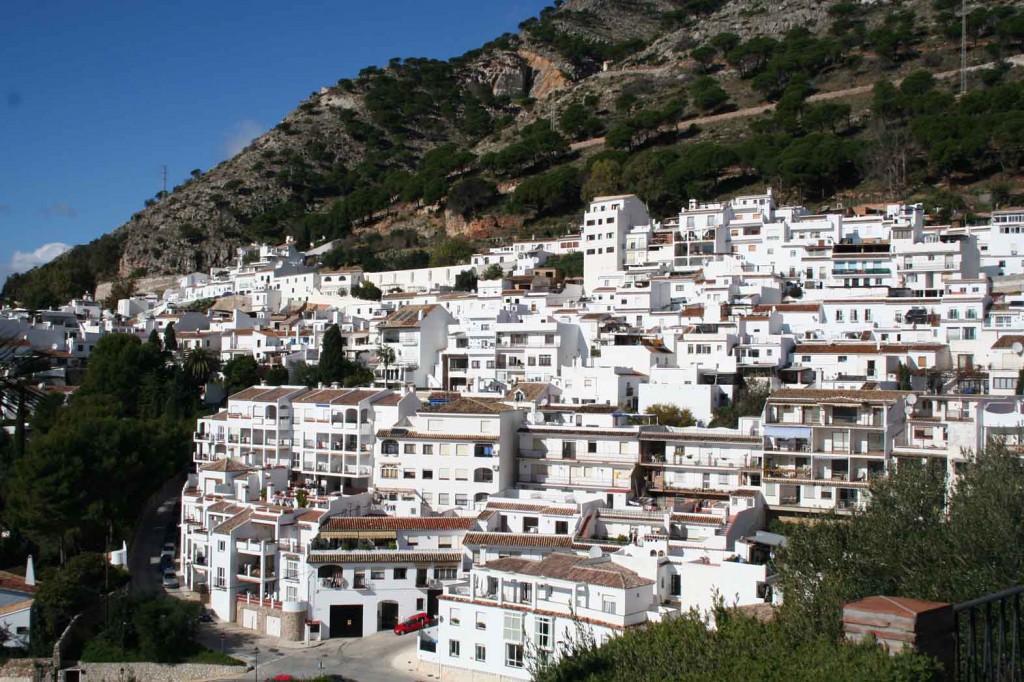 Mijas city is a small white village perched up in the mountains behind Fuengirola. The view from the city is absolutely fantastic and there are panoramic views of the coast and Fuengirola town. The city has a long history dating back from Roman times. Mijas Pueblo is one of Andalusia’s famous white towns and is a major tourist attraction. The city lies 428 meters above sea level and has an alluring view of a large part of the Costa del Sol. By clear weather you can see Gibraltar, the African coast and the Atlas Mountains. The village has narrow streets that are almost car-free, only those with permission are allowed to drive into the old town. If you do not want to walk around on foot, you can take donkey taxi or horse. Read more about Mijas

Nerja is a municipality and a city in Spain. The municipality of Nerja consists of the town of Nerja and the village Maro. Nerja is in the province Axarquía on the Costa del Sol in the province of Malaga in Andalusia, about 50 km east of the city of Malaga. The municipality has around 20,000 inhabitants, the summer comes several thousand tourists as well. Nerja’s history stretches very far back. In 1959 discovered playing children some stalactite caves near the city. In these caves were found bones, stone tools, pottery and paintings. It is believed that the caves were inhabited already 20,000 years BC Some of the caves are open to the public and are after the Prado in Madrid and the Alhambra in Granada the most visited attraction in Spain. In the city center is Europe’s Balcony (Balcony of Europe). This is a viewpoint which gives visitors an impressive sight to the sea. Read more about Nerja 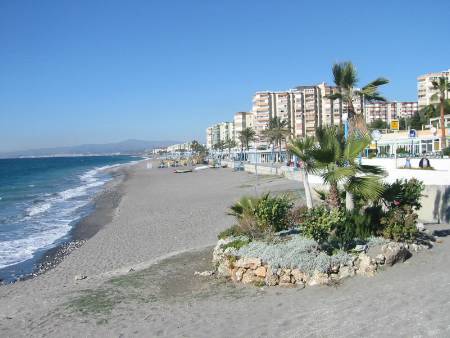 Torrox is a municipality in the province of Málaga in the autonomous community of Andalusia in southern Spain. It belongs to the comarca of Axarquía. It is located in Costa del Sol (especially Costa del Sol Oriental), on the Mediterranean coast and the foothills of the Sierra de Almijara. There are frequent, especially German and British tourists. The city itself is divided into sections: Torrox Costa on the sea and Torrox Pueblo, 4 km inland. Torrox Park, a residential section in between Costa and village, can be seen as another division. Torrox is located in close proximity to Nerja. Torrox has “the best climate in Europe”. Read more about Torrox 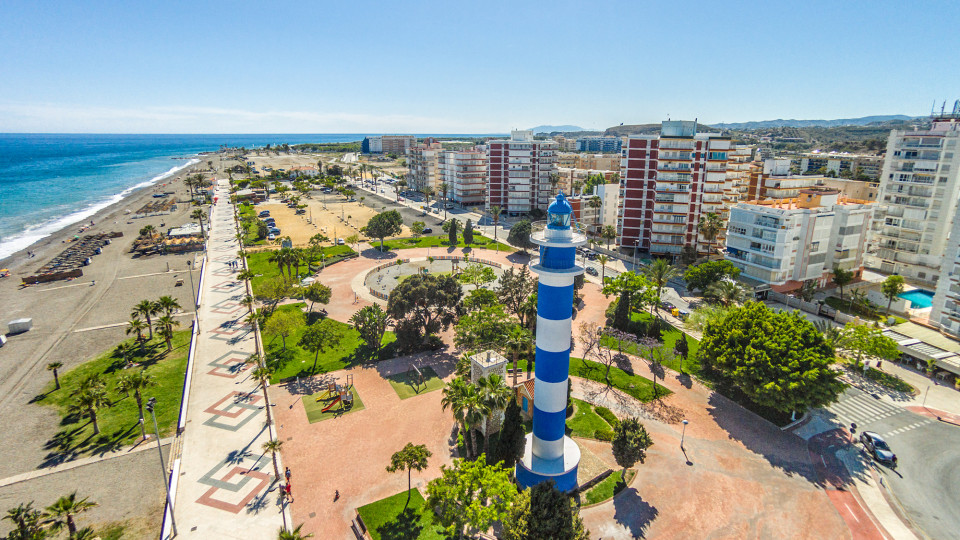 Torre del Mar is one of the main tourist resorts on the Costa del Sol in Spain. Located in the eastern part of the coast, the town of Vélez-Málaga, capital of the Axarquia region. There are unsubstantiated claims that Torre del Mar was once part of an ancient Greek settlement known as Manak believed to have been destroyed by the Carthaginians, before the arrival of the Romans. These days the city is better known for its four kilometers of sandy beaches lined with restaurants, bars and houses, mainly homes for summer visitors. Its lively cafés and restaurants provide the opportunity to enjoy good seafood and a cold drink in the heat. Read more about Torre del Mar 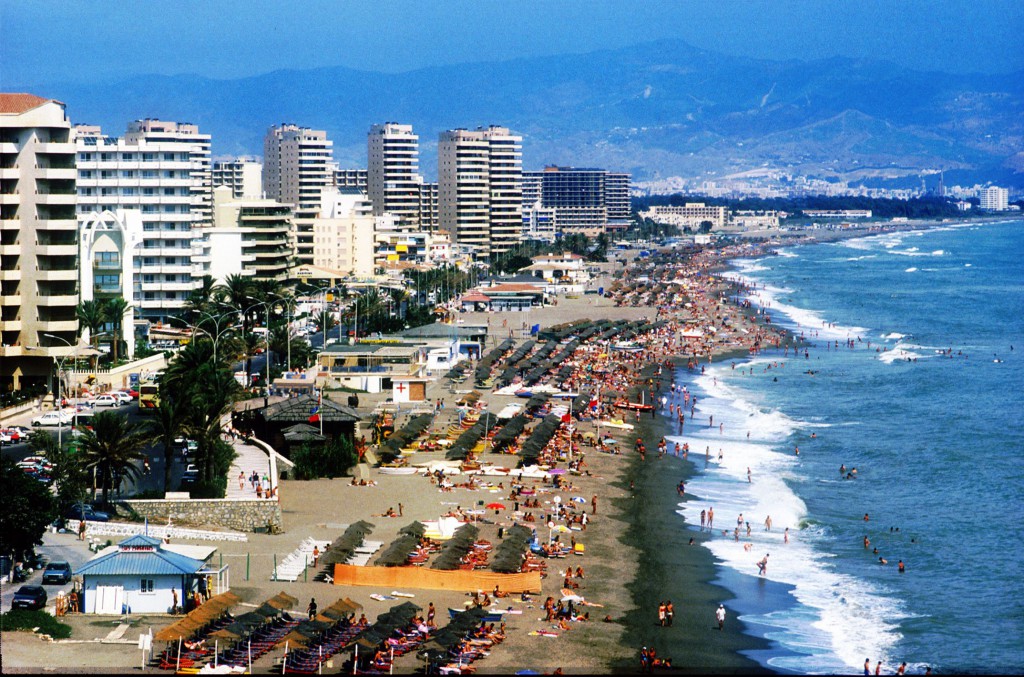 Fuengirola is a large town and municipality on the Costa del Sol in Malaga province in the autonomous community of Andalusia in southern Spain. It is located on the central coast of the province and integrated in the region of Costa del Sol and the Commonwealth of municipalities on the Costa del Sol Occidental. It is a major tourist resort, with more than 8 km of beaches and a medieval Moorish fortress. Fuengirola has a vibrant life as evidenced by all the nationalities living here. People from all over northern Europe longs for sunshine and many are buying property here. Read more about Fuengirola 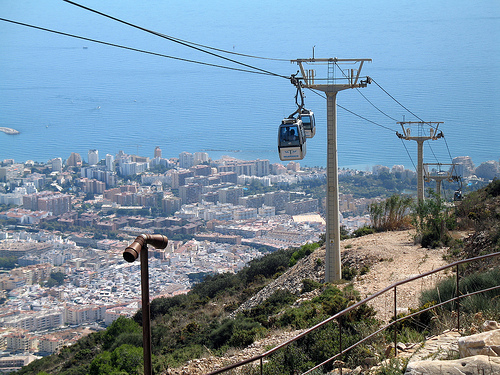 The pleasant resort town of Benalmadena is only 10 km southwest of Torremolinos. The city is best known for its fine sandy beach and its large marina. Benalmádena is a town and municipality in the province of Malaga, and is part of the autonomous Spanish region of Andalusia in southern Spain. Benalmádena is divided into 3 main areas, which combines a traditional Spanish village with a modern seaside resort. Benalmádena center is slightly vertically, a typical whitewashed Andalusian village and “Arroyo de la Miel”, a lively residential area. Down by the coast you will find the award-winning beaches of Benalmádena Costa, one of the most active tourist resorts on the Costa del Sol. Benalmádena Costa is the bottom portion closest to the coast. Characteristic of Benalmádena Costa Puerto Marina, with its round yellow-white buildings appear like a castle with luxury yachts around. From the port area offered both sailing trips, fishing trips and paragliding. Read more about Benalmádena

Torremolinos is a municipality on the Costa del Sol on the Mediterranean, just west of the city of Málaga, in the province of Málaga in the autonomous community of Andalusia in southern Spain. A poor fishing village before the growth in tourism beginning in the late 1950s, was Torremolinos the first of the Costa del Sol resorts to develop. It is located on the western shore of the Bay of Malaga and behind the Sierra de Mijas. Read more about Torremolinos 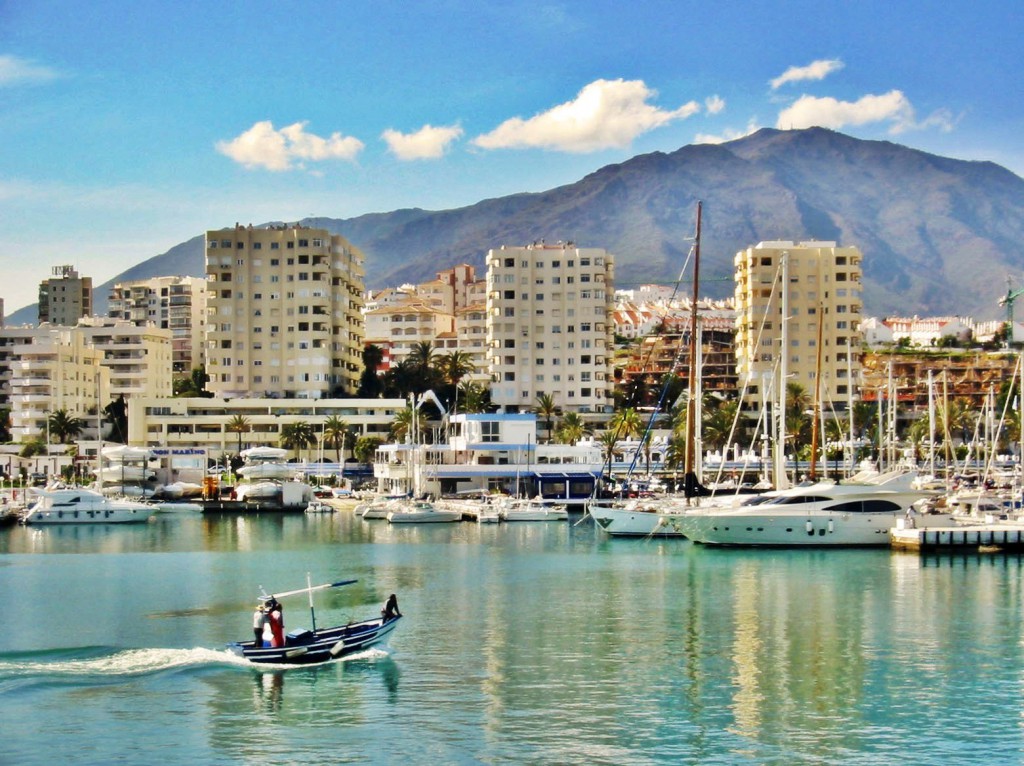 Estepona is a small idyllic town with about 50,000 residents. Like the other large and small towns along malagakysten, the main activity is tourism. However, in contrast to Marbella and Malaga city is Estepona a little jewel on the coast. This place has really Andalusian soul and ambience. The town and the immediate vicinity has a lot to offer for us who will vacation in this area. Here all the great beaches lots of outdoor activities. Both windsurfing and kiting are both very popular. Here you can play golf on good courses. For those who enjoy hiking or biking is great marked routes for this purpose. In the city you will find numerous cozy tapas bars where you can enjoy both good food and drink. You can visit the lighthouse and fine museeums. Moreover, this area is a host for two different film festivals each year. Read more about Estepona