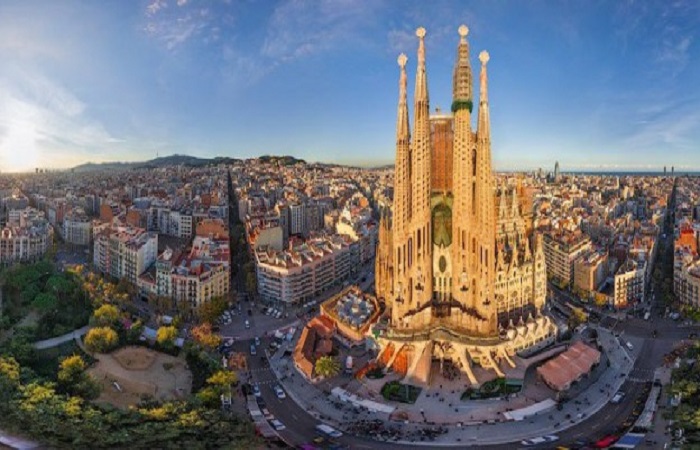 Top attractions and things to do in Barcelona. The second biggest city in Spain, Barcelona, has a lot to offer, just the architecture is enough to make Barcelona one of Europe’s most interesting places. In Barcelona there is a unique nightlife, a wealth of world-class museums and gastronomy, and sights, attractions and experiences in a row. Barcelona also have great artists like Gaudí, Dalí, Barceló and Miró.

18 top attractions and things to do in Barcelona

There is much to experience in the big city of Barcelona in Spain. The most mandatory is to get along with Antoni Gaudi’s amazing construction such as the La Sagrada Familia, and not least the unique Parc Guëll park. The art enthusiasts should definitely visit the Picasso Museum, and for many it will be great to experience Camp Nou to see FC Barcelona play with 100,000 football supporters. Here we show you the most important attractions and things to do in Barcelona. 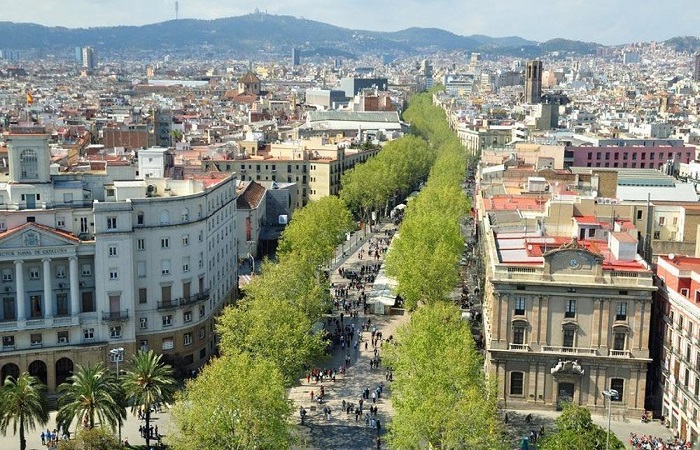 La Rambla is the very heart of Barcelona and is known worldwide. Nobody visits Barcelona without having been to La Rambla, the avenue of life among newsstands, florists, artists, painters and performance artists. La Rambla is the setting for street theater and various one-man show, and Spaniards as tourists bivane the event in the flock. Regardless of skill, the artists are rewarded with applause and coins. 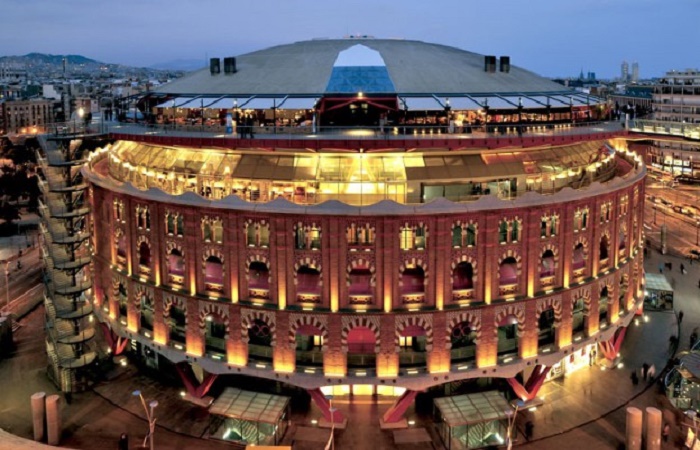 Fresh food, antique furniture and scented flowers. The Catalan metropolis has over 40 markets in (almost) all kinds. You have not really experienced Barcelona before you walk along the sales pitches in one of the city’s markets, allowing you to experience all the smells, the colorful fruit selection and the excitement of bargaining at the right price in one of the city’s flea markets. See overview of the top markets in Barcelona

# 3 Picasso and the old town of Barcelona 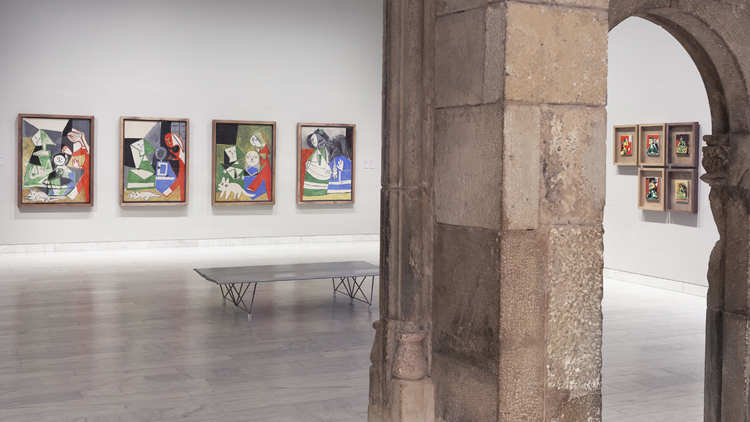 The old part of Barcelona in Spain consists of three districts: “Barrio Gotico” (Gothic part), Raval and Rivera, both of which constitute the Bohemian part. Here both artists and musicians make for a good mood. In “Barrio Gotico” you will find The Picasso Museum, which is one of the three museums in the Picasso Triangle. The other two are found in Paris and Málaga. 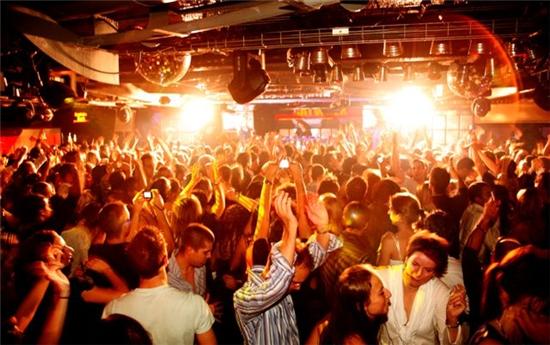 As one of Spain’s largest cities, Barcelona offers a fantastic nightlife. Nightlife is mostly concentrated in the area of ​​”Puerto Olímpico” (the Olympic harbor) where you will find discotheques, nightclubs, bars, restaurants and more. If you go all the way down to the end of La Rambla, “Puerto Olímipico” is on the left. The port area located right below La Rambla is called “Port Vell” (the old harbor). There is a good selection of Spanish restaurants in all price ranges with typical Spanish food, seafood, paella etc. And do not forget the dessert “Crema Catalana”, a caramel pudding typical of the region. Rear more about the nightlife in Barcelona 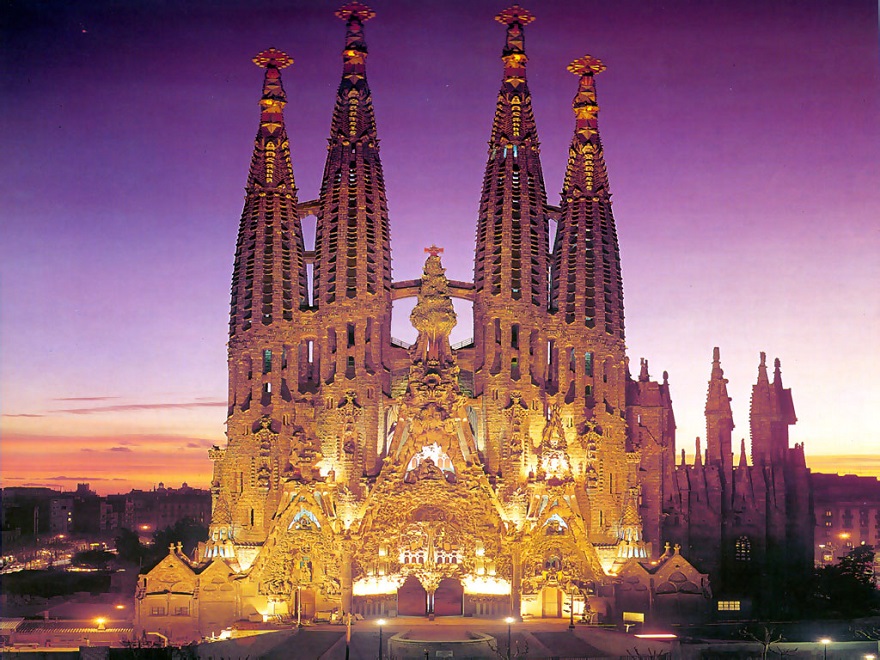 La Sagrada Familia is definitely Barcelona’s main attraction. The basilica was designed by architect Antoni Gaudí, who was appointed project manager when the construction started in 1882. La Sagrada Familia became his life’s work until he was hit and killed by the tram on his way to work one day in 1926. The work continued after his death and has not yet been completed. The construction of the basilica is still ongoing after Gaudí’s sketches. Eight of the future twelve bell towers of about 100 meters are raised, each dedicated to the twelve disciples. In the center of the basilica, a 170 meter high center judgment is planned in honor of Jesus Christ, a 125 meter tall tower in honor of Virgin Mary, and a tower in honor of the four evangelists. 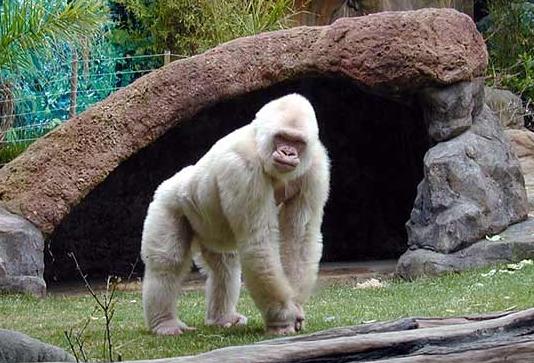 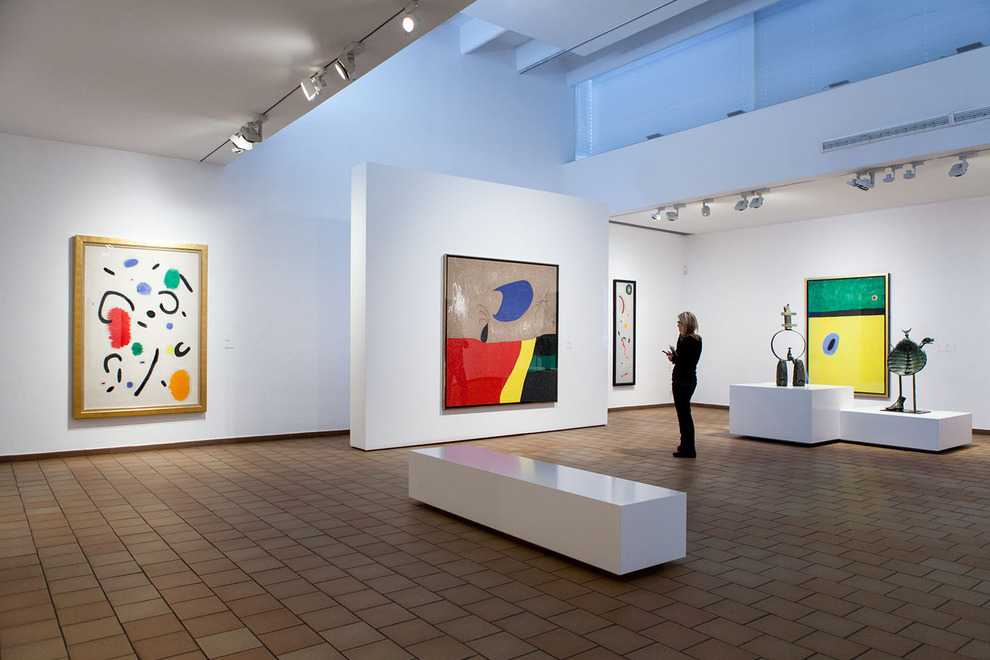 The Miró Museum (“Fundació Joan Miró”) houses the famous artist Joan Miró, born in Barcelona in 1983. The museum is located on a hill in Montjuïc, and from here you have a great view of the city. The collection consists of paintings, sculptures, textiles, graphics and ceramics made by Miró. In addition, there is a small collection of contemporary art created by other artists. 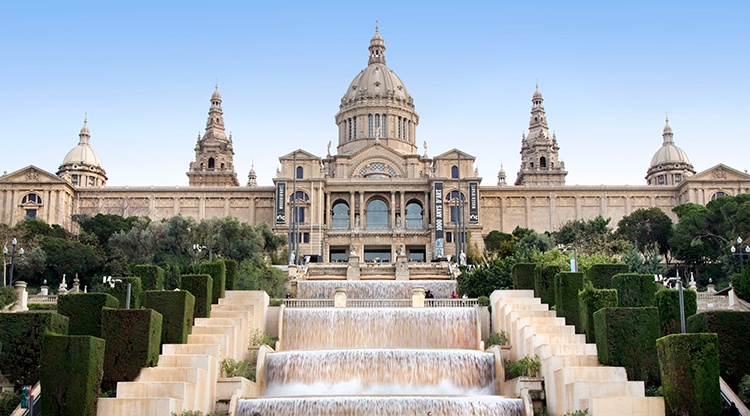 The National Museum of Catalan Art (“Museu Nacional d’Art de Catalunya”) is a popular destination in Barcelona, ​​and is particularly famous for its collection of Romanesque art (from the 1000th to the 1200s). This collection is considered to be one of the world’s most complete. The museum opened in 1990 and today has more than 250,000 works.
The National Museum is located southwest of Barcelona city center – in the beautiful Palau Nacional building at Placa d’Espanya. 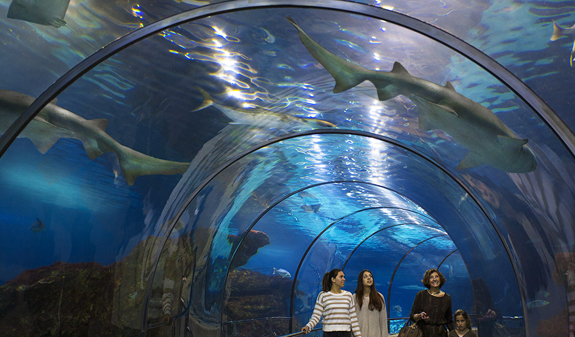 The aquarium in Barcelona is an aquarium at Moll d’Espanya in Port Vell, in the Catalan city of Barcelona. The Barcelona Aquarium (“L’aquarium Barcelona”) was opened in 1995 and is a tourist attraction for the whole family. This is one of Europe’s largest aquariums, with 11,000 animals and 450 different species. The Barcelona Aquarium also has a long subsea tunnel where you can observe fish and sharks close up. The site also has a huge oceanarium and an interactive section about the marine world, which is both entertaining and educational. The aquarium is located at the port in the center of Barcelona. 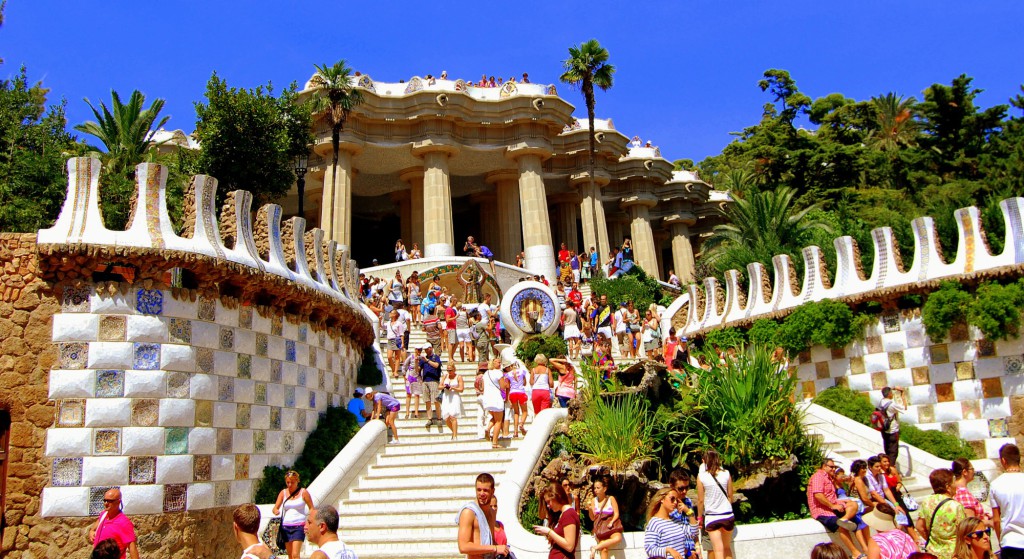 Güell Parc is one of Barcelona’s most important parks and is located on a hill in the northern part of the city with views of Barcelona. The park is built with footpaths and picnic areas, and what characterizes the park is Gaudi’s fascinating art that has been transformed into many films and series on Spanish and international television. Here we find, among other things, the colorful lizard that slings in the stairs at the entrance to the park. On the park’s upper plateau you will find the famous benches that cross the plateau with colorful ceramic mosaics. The park is impressive. One can simply not visit Barcelona on the Costa Brava without strolling through this park.

# 11 The Cathedral in Barcelona 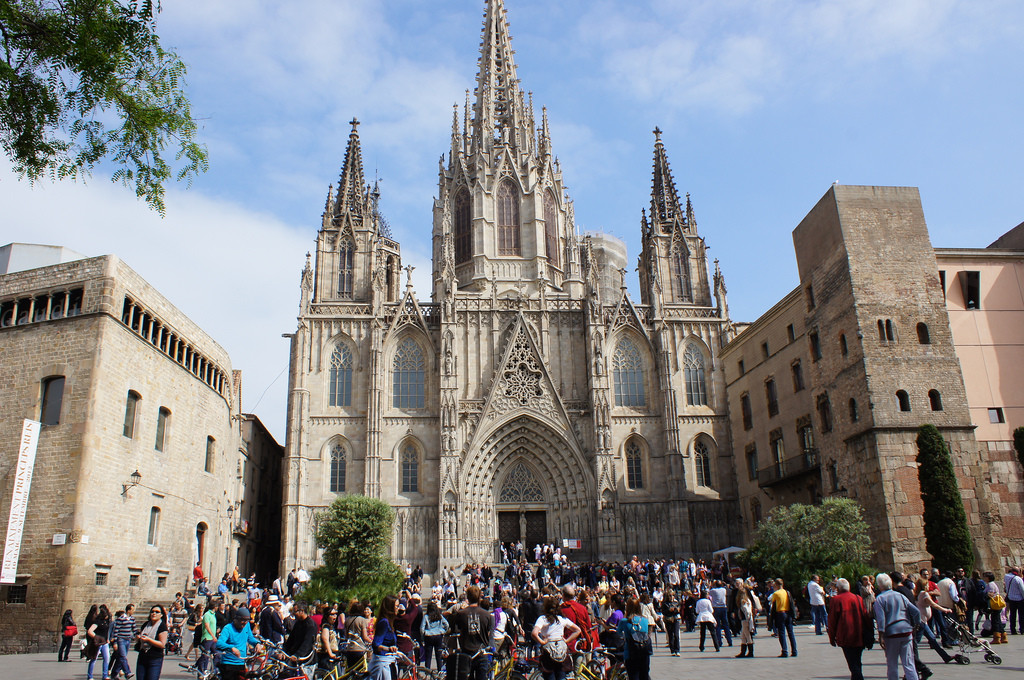 The beautiful cathedral in Barcelona, ​​commonly called “La Seu” – is the seat of the city’s archbishop. The cathedral is called Catalan «Catedral de la Santa Creu in Santa Eulàlia de Barcelona». It is devoted to Barcelona’s patron saint – Sankta Eulàlia – which is buried in the crypt. The cathedral was listed in the period 1298-1420. The facade is in neo-Gothic style, dating from the 19th century. Barcelona Cathedral is 93 meters long and 40 meters wide. 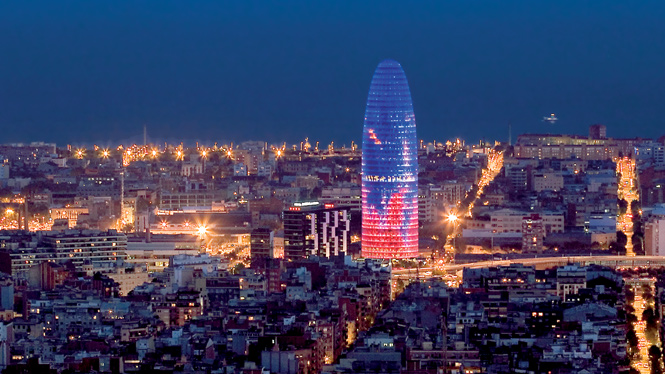 Torre Agbar is an abbreviation of the Catalan name of the company that owns the building, Aguas de Barcelona. The tower is a 144.44 meter high skyscraper at the Plaça de les Glòries Catalanes in Barcelona. It was designed by the French architect Jean Nouvel and was opened in June 2005. It was the King Juan Carlos who consecrated the tower on September 16, 2005. According to the architect, the shape of Torre Agbar is inspired by the Montserrat Mountains that surround Barcelona, on a geyser that rises to heaven. The tower has glass facade with over 4500 window openings. In the evening, it lights up in blue and red. Torre Agbar is Barcelona’s third tallest building, after Hotel Arts and Torre Mapfre, both of which are 154 meters tall. 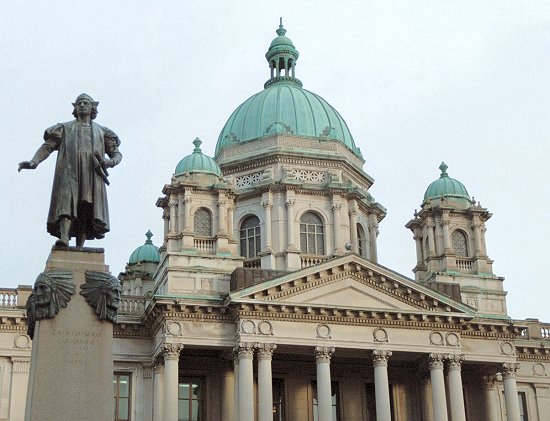 The Columbus Monument is one of the most famous landmarks in Barcelona, ​​and is in the south end of the La Rambla pedestrian street, opposite the harbor. The monument measures a total of 60 meters in height, and was listed in connection with the World Exhibition in 1888 – in honor of Christoffer Columbus. The monument was designed by Gaieta Buigas, and the 7 meter tall statue at the top was made by sculptor Rafael Atché. 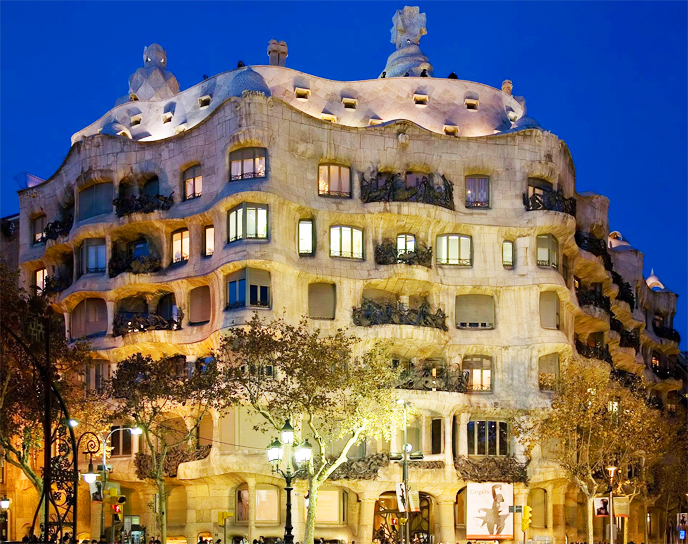 The Milahuset is actually called La Pedrera and is perhaps the most famous work of Gaudi, with the exception of the Sagrada Familia church. The building is a symbol of Barcelona’s contemporary art and culture. It is the opportunity for visitors to enter the building and look at the interior, which is at least as exciting as the stunning facade. The Milahuset is located in the Eixample area of ​​Barcelona, ​​in the street Carrer de Provenca 261-265. 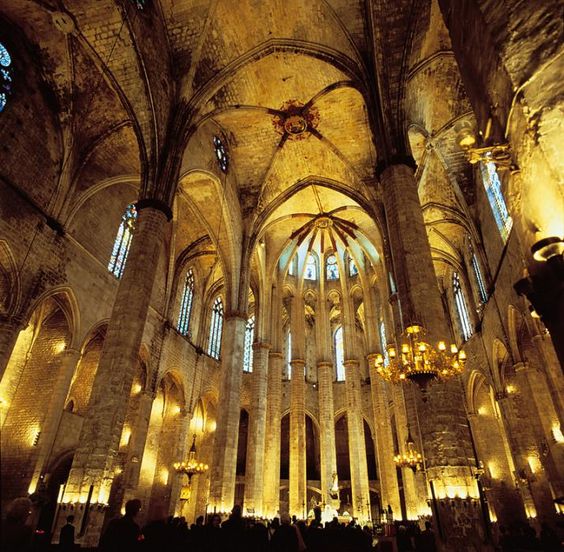 Santa Maria del Mar is a magnificent Gothic church from the 13th century, located in the area of ​​La Ribera, more specifically in the Calle Montcada street. The church plays an important role in the historical novel of the Cathedral of the Sea by Ildefonso Falcones, one of Spain’s best-selling books ever. (And we can recommend this novel to the warmest, whether you’re going to Barcelona or not. It’s historically correct, educational, interesting and exciting.)

The perhaps most important place in Barcelona is Placa de Catalunya, located at the top of La Rambla main street. The square has lots of seating and beautiful fountains. You will always find something to look at here, as well as being close to some of Barcelona’s best shops. 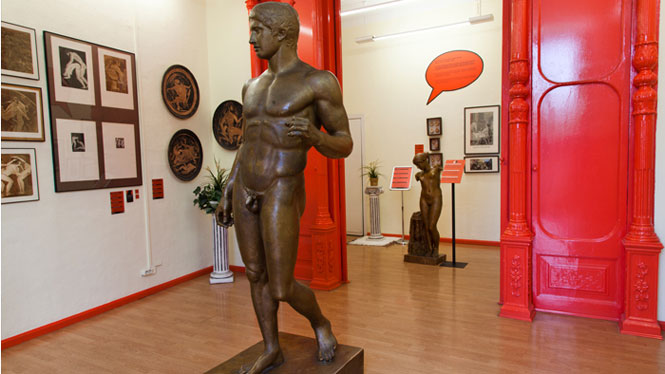 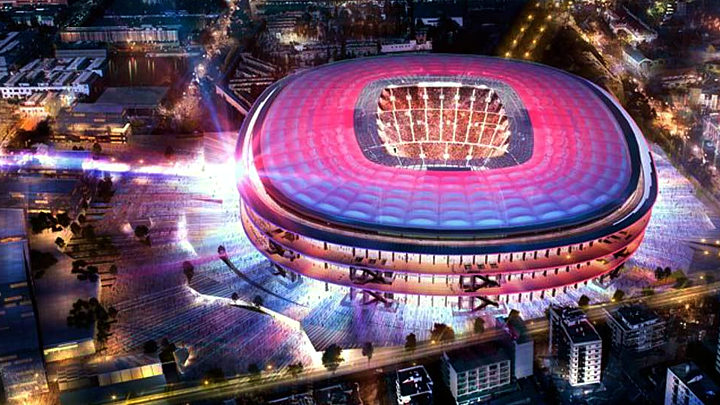 Camp Nou is home to FC Barcelona, ​​one of the world’s best football teams. The stadium takes nearly 100,000 spectators and has guided tours and football museums as well as football matches with great atmosphere. Football Club Barcelona, ​​or Barca, was founded by Joan Gamper in 1899. Since then, the club has evolved into the very symbol of Catalan identity. That is why it is said that FC Barcelona is far more than a football club. The club’s motto is also “My que un club” (more than one club).

Map of attractions in Barcelona

Need Car hire on your holiday in Barcelona?

The majority choose to pick up a car at Barcelona Airport. With car rental you and your family have the opportunity to take pleasant day trips, take exciting excursions at your own pace and not be dependent on public transport. By comparing prices of car rental from several companies, you can save a lot of money. Check your prices on car hire in Barcelona now.

Useful links about Barcelona in Spain