10 Top Places you must visit in Denia in Spain 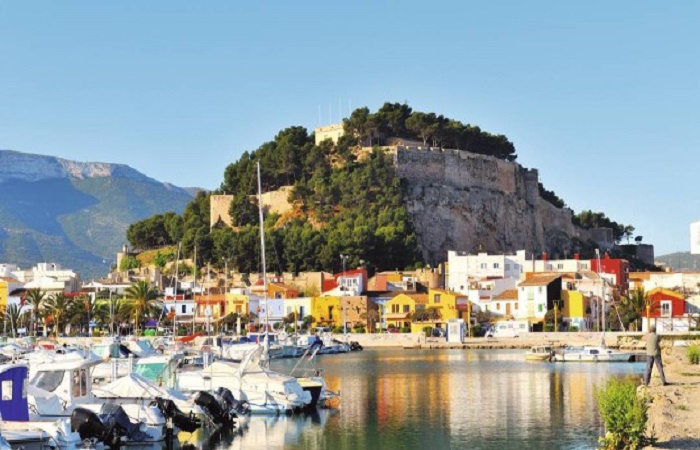 If you visiting Denia, there are some places you should not miss. This town which is also the capital of the Mariana Alta, has an impressive history, beautiful scenery, historic buildings, museums, a wealth of experiences and activities, as well as world-famous fiestas. Denia truly has something to offer for everyone, both young and old. We give you the ten top places to visit in Denia, Spain.

#1 Denia Castle, the castle that protects the city 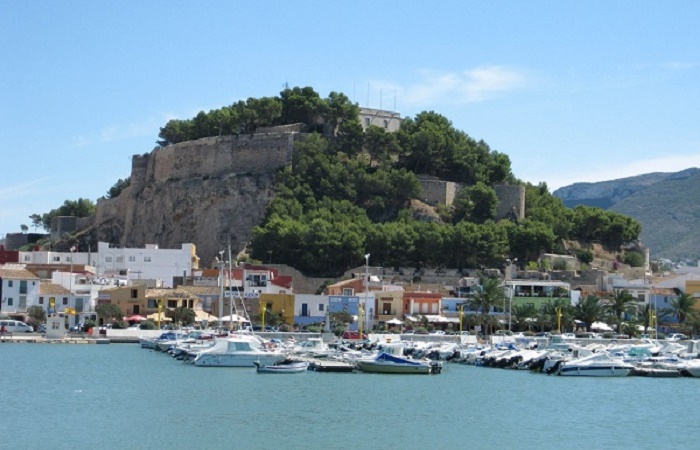 The castle in Denia you can see from everywhere, the castle thrones over the town, and it looks like that the castle still protecting the city. If you’re at the castle you will enjoy stunning views of Denia, the Mediterranean and the surrounding areas. The archaeological museum is really worth a visit to get a feel of the rich history. Directly from the castle you walk into Denia’s oldest neighborhoods – Les Roques, with small streets and houses. You can still feel the history here vibrate. 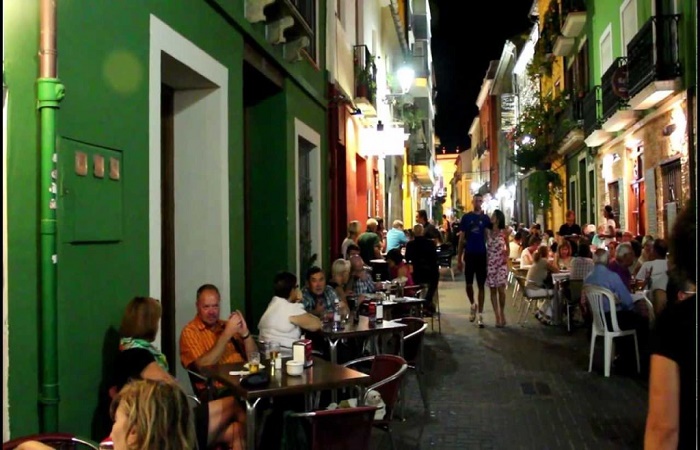 Not many towns on the Costa Blanca has such a beautiful and authentic street which is full of life and provides the typical Mediterranean atmosphere. With small tapas bars and restaurants you can easily spend a few days to get through them all. An experience of a lifetime. 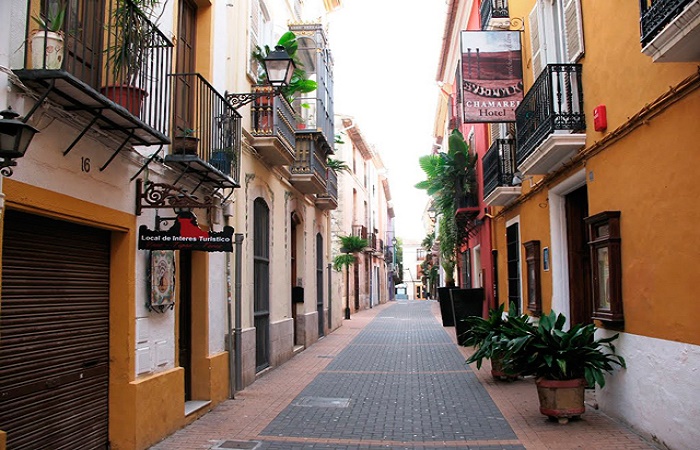 Parallel to Calle Loreto, you will find the street Calle Cavallers, one of the most impressive streets of the historic center. There you’ll find the city’s Museum of Ethnology, which is located in a typical bourgeois mansion built in the second quarter of the 19th century. In this museum you will find an exhibition of the golden age which came thanks to the dry raisin trade. Inside you will find a collection of clothes, working tools of the period.

Marques de Campos Street is easy to find thanks to the large maple trees on either side of the street. Marqués de Campos Street comes from the name of Mr. José Campos who conducted major improvements for the city, for example, he opened a gas factory which provided lighting, opening of Dénia-Carcaixent railroad and the opening of the Port Works Society. Here you will find cafes, restaurants, and shops. 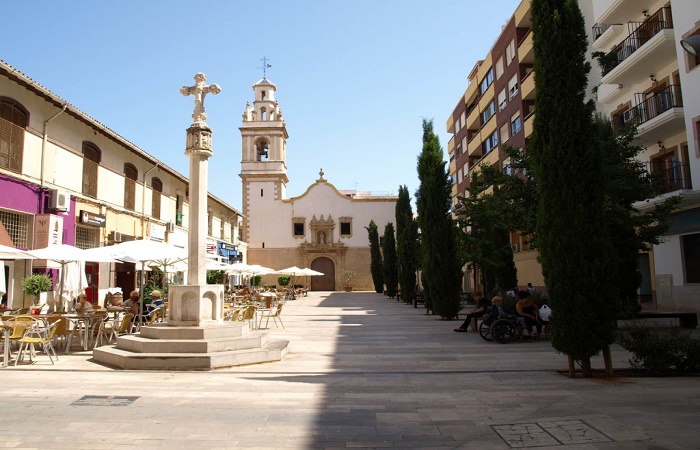 Plaza Convent takes its name from the former convent that can connect to “San Antonio de Padua Church” (built in the 17th century). The monastery seems to have been built on what was previously Hermitage: Madre de los Desamparados (Our Lady of the homeless). Today there are only monastery that remains after the destruction caused by the Spanish Civil War, part of the monastery that surrounded the patio built with sandstone and stone masonry, as well as the exterior façade covered with ashlar masonry, is the best preserved ruins at the present time. 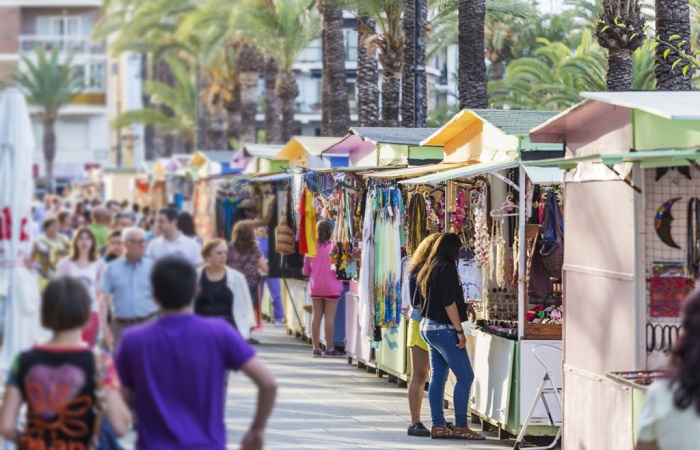 Esplanade de Cervantes is like a green barrier at the end of Calle Marques de Campo, parallel to the waterfront, as a transition between the sea and the city. Esplanade regarded as a meeting place, where you can walk in the shade of the palm trees and watch on exquisite craftsmanship in the many stalls, and here they have the opportunity to taste homemade products. 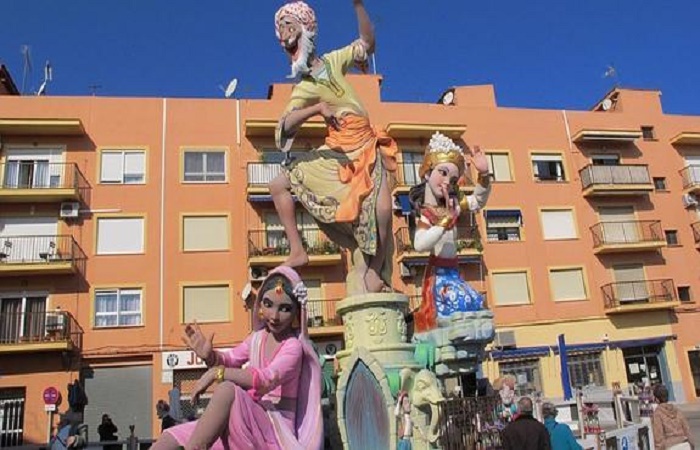 Its relationship with the sea has been present in this part of Dénia, since sailors and fishermen have always lived here surrounded by warehouses and maritime commerce. The buildings and current urban image of “Baix la mar” originates from the 19th century, although part of this area was occupied by the Arabs who called it “raval de la mar” or maritime sectors. Of the four metropolitan area in the Islamic period, was maritime barrio most likely the most important of the three since it was located next to the sea and directly related to the port. 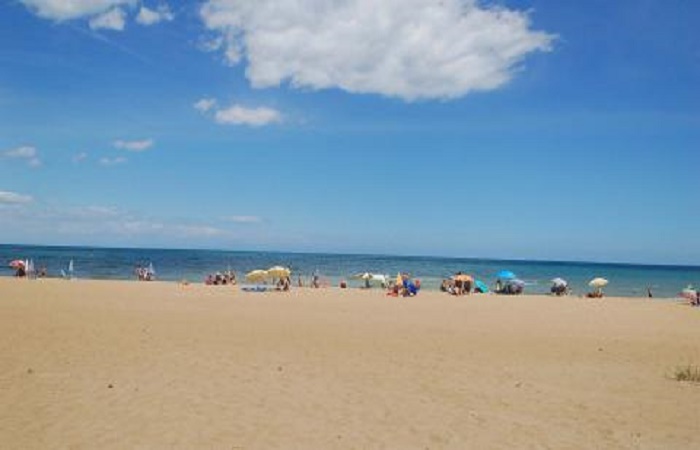 Denia has more than 16 kilometers of beautiful and good accessible beaches. Most of them with a fine sand and any services you might need. Denia is a coastal town, historically it is known as a Harbour City. Among the most attractive places on the Costa Blanca, Denia is also a very important port with four Sports Marinas and ferry connections to the Balearic Islands. 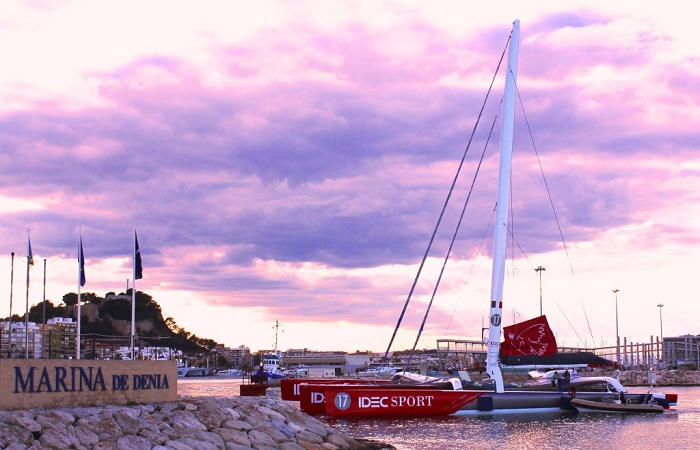 Denia also has one of Europe’s most popular marinas, offering international traffic, an excellent location for short or long winter walks. Over the last fifteen years, the supply exacerbated by three private marinas. Since we are on the northern part of Denia, we find first Marina El Portet, north breakwater, also with a leisure which include, bars, restaurants and Nautical shops.

#10 Restaurants in Denia worth a visit 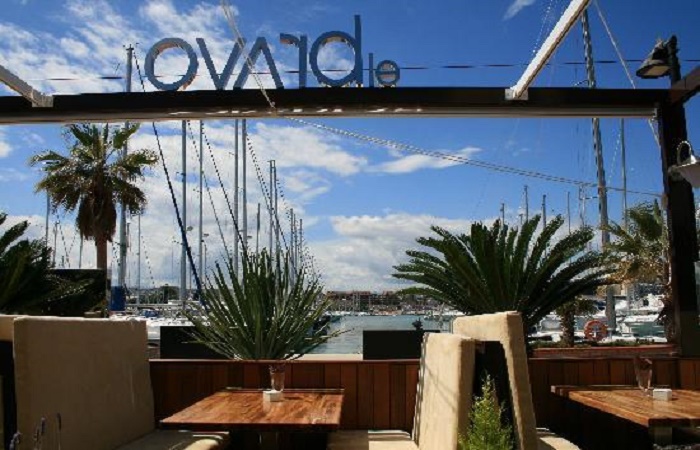 If you are in Denia you have to visit a ​​good traditional Spanish restaurant to taste the authentic Spanish gastronomic cuisine. Some good recommended restaurants are Las Bairetas Denia, El Bravo, and Republic. Especially tapas is popular. A good rule is that the closer the tourist areas a restaurant is located, the more affected by this it is. Both the menu and the price will then be adapted to tourists.

Map of Attractions in Denia

Need Car hire on your holiday in Denia?

Now a day’s it is very popular to rent a car on your holiday in Denia. The majority choose to pick up a car at Alicante Airport. With car rental you and your family have the opportunity to take pleasant day trips, take exciting excursions at your own pace and not be dependent on public transport. By comparing prices of car rental from several companies, you can save a lot of money. Check your prices on car hire in Denia now.