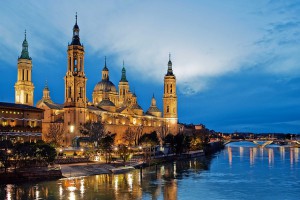 Zaragoza is the capital of Zaragoza province and the autonomous community of Aragon, Spain. It is situated on the river Ebro and its tributaries, the Huerva and Gallego, near the center of the region, in a valley with a variety of landscapes, ranging from desert (Los Monegros) to thick forest, meadows and mountains.


Many ancient sites to see in Zaragoza, including parts of the Moorish city walls from the time before the 1000’s and the beautiful Cathedral of San Salvador, consisting of parts from the 1100s. The city offers museums such as the historical museum Museo de Zaragoza, Museo Pila Rista dealing with religious art and art museum devoted to the artist Pablo Serrano. It hosts several festivals during the year and the largest is the traditional festival Fiesta del Pilar which takes place in October.

Zaragoza Airport is located about 15 km outside the city.