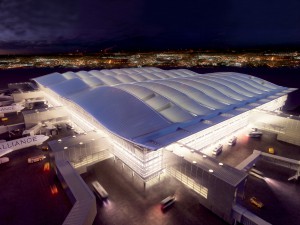 Zaragoza Airport (ZAZ) is 16 km west of Zaragoza. There are buses between the airport and the center of Zaragoza every half hour Monday to Saturday and hourly on Sundays. Atesa, Avis, Hertz Europcargo is the car hire that offer their service at the airport.

528,313 passengers visited Zaragoza Airport in 2009. In addition to being a civilian airport as the airport is the base for the Spanish Air Force and is also used by NASA. From Zaragoza, a journey to 11 different European destinations, the airline that serves the majority of it is Ryanair.

Zaragoza Airport has a cafe and two shops. Other amenities include ATM and wireless internet. There are no hotels at the airport.

Zaragoza is the capital of Zaragoza -provinsen and the autonomous community of Aragon, Spain. It is situated on the river Ebro and its tributaries, the Huerva and Gallego, near the center of the region, in a valley with a variety of landscapes, ranging from desert (Los Monegros) to thick forest, meadows and mountains.