Rental Car Lyon
RentaCarBestPrice.com compare prices from a number of car rental companies and find the best price on car hire. Book with us and get necessary insurance and unlimited mileage included in the price. 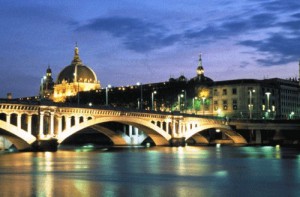 Lyon is the third most populous city in France (after Paris and Marseille), with 484,344 inhabitants, and the second largest urban area in the country with 2,118,132 inhabitants. Is currently the capital of the department of Rhône and Rhône-Alpes region. Situated north of the natural corridor of the Rhone valley (linking Lyon to Marseille) and from the Massif Central to the west and the Alps to the east, the city of Lyon occupies a strategic position on the north-south movement in Europe.

The city is known for its historical and architectural landmarks and parts of the old town “Vieux Lyon” UNESCO World Heritage Site. Here are many medieval buildings.

Lyon has more than 20 different museums. Some of the most popular is the “Musée des Arts Decoratifs-” – where one can see furniture and objets d’art from the 1600s and 1700s and the “Musée des Beaux-Arts” – museum with large collection of paintings and sculptures from the 1300s to mid 1900s. It is located in a former convent from the 1660s.

One of the biggest tourist attractions in the city are the white basilica “Notre Dame de Fourvière”, built in the period 1872 – 1894, which is beautifully situated on a hill in the city.
Near the Basilica of the Roman ruins with the remains of the ancient theater and Gallo-Roman Museum.

Lyon has its own airport, Aéroport – Saint – Exupéry, located 25 km east of the center.

Ancient capital of Gaul during the Roman Empire; during the Middle Ages, Lyon became a market town and later in the nineteenth century in a financial center of the first order. Increased economic prosperity for the monopoly on silk and then the emergence of industries, especially textiles and chemicals. Today it is an important industrial center specializing in chemical, pharmaceutical and biotechnology industries.

Lyon is the second largest university city in France, embracing in its metropolitan area over 120,000 students spread across three universities and many engineering schools and grandes écoles. It also has an important historical and architectural heritage, having a large surface inscribed as a World Heritage Site by UNESCO.

Historically known as the world capital of silk, famous as one of the gastronomic capitals of France among the largest in the country.