Rental Car Waiblingen
RentaCarBestPrice.com compare prices from a number of car rental companies and find the best price on car hire. Book with us and get necessary insurance and unlimited mileage included in the price. 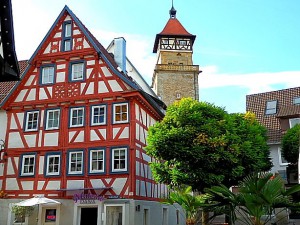 Waiblingen is located in the southwest corner of Germany – in the state of Baden-Wurttemberg. It currently has approximately 53,000 inhabitants (2008), and has had city status since 1250. Most of the old center was destroyed during the Thirty Years’ War (1634), but was then rebuilt in the period 1640 – 1700. “New” Waiblingen is very well preserved – and currently represents a major tourist attraction.

Of the buildings that were damaged, especially the city’s original fortification mentioned. It includes a city wall and several gate-tower, where Hochwachturm and Beinsteim Torturm is the best known. Also, the city’s main church – St. Michael – is considered among the most important sights. Among the surviving buildings from the 1600s is a variety of beautiful half-timbered houses – including the city’s old town hall – which make up a unified architectural environment. Otherwise, the historic park Waiblinger Apotheker-Garten with Nikolauskirche well worth a visit.

One attraction of considerable recent date is Marktdreieck (built between 1974-1976), and which, inter alia, houses the city library. This building represents a modernist eye-catcher in the middle of the historic architecture.