Rental Car Weinheim
RentaCarBestPrice.com compare prices from a number of car rental companies and find the best price on car hire. Book with us and get necessary insurance and unlimited mileage included in the price. 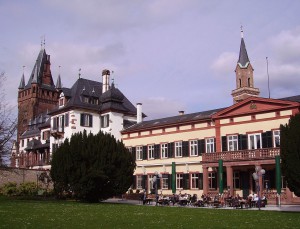 Weinheim is located northwest of the southern German state of Baden-Württemberg, and is a city with approximately 43,000 inhabitants (2008). Distance south / southwest to the major cities of Heidelberg and Mannheim is around 10-15 km.

Weinheim is often called “Zwei-Burgen-Stadt” because of the two castles which “monitors” the city. The oldest of them, Windeck, had been built in the 1100s, but heavily battered in 1674. Only in the 1960s the whole plant restored – and is today classified as a historical monument. Wachenburg is much younger. It was built during the 1900s first two decades – and today houses ia a restaurant. Both castles are regarded as some of Weinhems main tourist attractions.

Otherwise, there are several attractions around the historic square Mark square in the center. Here one finds among other things, Altes Rathaus (Old Town Hall) from 1557. It no longer Town Hall functions. After 1st World War, they moved to Weinheimer Schloss close – an imposing edifice that was made in several stages during the period from around 1400 until the early 1800s. It previously belonged to the prince of Kurpfalz.

Among other attractions, the following are mentioned: City Museum (with a valuable archaeological collection), the botanical garden Schau- und Sichtungsgarten Hermannshof and arboretum (woodland park) Exotenwald.