Are you looking for affordable car hire in Spain? Now a day’s it is very popular to rent a car, the majority choose to pick up a car at the airport. With car rental you and your family have the opportunity to take pleasant day trips in the areas surrounding and you will not be dependent on public transport. By comparing prices of car rental from several players, you can save a lot of money. If you prefer to retrieve the rental car in the city center, this is also possible. 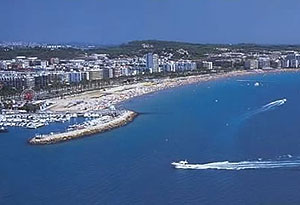 Salou is a municipality in the comarca of Tarragona, in the province of Tarragona in Catalonia, Spain. The city is located about 10 km from Tarragona and Reus on the Costa Daurada, and 112 km from Barcelona. Apart from its many beaches interrupted by rocky coves, and its landscaped promenade, one of the main attractions is the PortAventura resort. The Dutch movie Costa! and TV series of the same title were both filmed in Salou.

In the heart of the Costa Daurada (‘Golden Coast’) Salou is a vibrant seaside city and a top tourist destination. Famous for its stunning sandy beaches and Mediterranean climate, the PortAventura resort can also be found here. A crucial ancient port for the Greeks and Romans, today Salou is all about chilling out and having a good time.

Salou lies within the autonomous region of Catalonia (with Barcelona its capital), so Catalan is the official language. However, Castilian Spanish is also spoken by most, while English, French and German are widely understood in tourist areas.

The currency is the Euro after the discontinuation of the Spanish Peseta.

The Golden Coast is surely so-named not just for its delightful sandy beaches but also for the weather: this is a sunny place, warm and dry in summer (July and August averages are just under 25’c), without the sweltering heat of southern Spain, and agreeably mild in the winter. Shorts and t-shirts are advised!

Salou is surrounded by beaches (34 of them are Blue Flag standard!) so relaxing on the golden sands is a must. For the more energetic there is a wide variety of watersports available – these can be arranged from the Llevant Beach, which runs along the main promenade of Passeig Jaume I.

Drawing around 4 million visitors a year, PortAventura is the premier theme park in Spain. As well as containing a huge waterpark and a plethora of exciting rides, it is arranged into areas based on civilisations: the Mediterranean, the Far West, Mexico, China and Polynesia. But bizarrely there is also a zone themed around Sesame Street! A new area – Ferrari Land – will be opening in 2017.

There is great interest for golfers too: the Lumine Mediterránea Golf and Beach Community boasts two courses designed by Greg Norman.

Meanwhile, for the culturally curious the historic city of Tarragona is just a few minutes up the coast and still holds many ancient ruins.

Market culture is big in Spain and few things can rival the pleasure of wandering amongst the hustle and bustle of a busy market. Salou has its own street market held around the City Hall on Monday mornings, but the best in the area is just along the coast at Cambrils – this takes place every Wednesday, but be sure to turn up early as it’s all over by 2pm. Cambrils antique market (every Saturday in the high season) is also very popular. Why not head down and see if you can pick up a bargain or a curio as a souvenir?

If you want a more normal shopping experience then centre your attention on the Ponent area, while there are also many shops along the promenade of Passeig Jaume I. There you can even find an official FC Barcelona shop.

Salou is very tourist-orientated so there is no shortage of restaurants. These represent a broad range of international cuisine, as well as plenty of Spanish places serving paella as a mainstay. If you want to go more upmarket then we recommend La Goleta, or head to the posher end of town around the marina. The nearby fishing village of Cambrils is well-known for its seafood restaurants too. Regional delicacies include:

Suquet de peix: this rich and garlicky fish stew involves hake, prawns and ground almonds
Mongetes amb botifarra: traditional spiced Catalan sausage with white beans
Cap i pota: a tasty dish of stewed pork, often served with warm white bread,
Why not sample a local wine at the same time? Specialities of the region include Cava and refreshing rosés.
Nightlife in Salou is lively and packed with options, with many bars straggling right on to the beach. Charlie Chaplin’s is a favourite with holidaymakers, as are The Butler and the James Bond-themed 007 Bond. If you’ve got kids then Jekyll & Hydes and Xiringuito Fornes are good family-friendly spots. For dancing later on Snoepy’s is a local institution and Flash Back is popular with an older crowd who favour vintage hits. At the nearby resort of La Pineda you can find Pacha, which often has star DJs.

You don’t need to go far to enjoy yourself in Salou but if you’re feeling adventurous or just want to explore further along this gorgeous stretch of coast then hiring a car is a great way to see more or get off the beaten track. If you do, here are a few helpful things to bear in mind:

The legal limit for alcohol is low: 0.05% (0.03% for those who have less than two years’ driving experience) and penalties are harsh
Seatbelts are compulsory for everyone in the car. Children under twelve can are only allowed in the front passenger seat if there is a fitted child’s safety seat
Full beam headlights are prohibited in built-up areas and tunnels
There are lots of toll roads (‘peajes’) in Spain, you can pay by cash or card
‘Gasolina’ means petrol, ‘Gasoleo’ is diesel.

Reus airport is six miles north of the city centre and is served by many UK airports, as well as other European destinations. Barcelona airport, a major international hub, is sixty miles away.