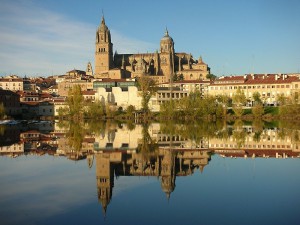 Salamanca is a city in northwestern Spain, capital of the province of Salamanca in the region of Castilla y León. Its Old Town was declared a UNESCO World Heritage Site in 1988. With a metropolitan population of 228,881 in 2012, according to the National Institute of Statistics (INE), Salamanca is the second most populous metropolitan area in Castilla y León, after Valladolid (414,000), and ahead of Leon (187,000) and Burgos (176,000 ).


Salamanca located about 200 kilometers (124 miles) west of the Spanish capital Madrid and 80 km (50 mi) east of the Portuguese border.

Salamanca is the capital of the province with the same name and belongs to the region of Castilla y León northwest Spain. It is a little over 200 km to the capital Madrid in the southeast. Salamanca is located about 100 km east of the border with Portugal and lies on the River Tormes. Its history stretches back to before the birth of Christ, as the city was captured by Hannibal in 220 B.C.

Because of University long history, many old buildings to see in the city, including several churches as the two cathedrals from the 1100s to 1500 numeral. Square Plaza Mayor are from the 1200s and the historic district is listed on UNESCO’s world heritage list. Salamanca offers several art museums in addition to a museum about bullfighting and other historical museums.

Salamanca Airport is located approx 15 km outside the city.