Rental Car Rocamadour
RentaCarBestPrice.com compare prices from a number of car rental companies and find the best price on car hire. Book with us and get necessary insurance and unlimited mileage included in the price. 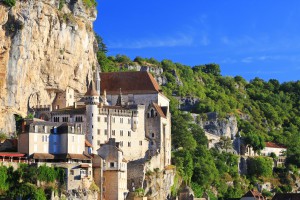 Rocamadour is a town and French commune located in the department of Lot, in the Midi-Pyrenees.

Its name comes from the relics of St. Amador whose body allegedly uncorrupted, was found by Benedictine monks inside the Marian shrine in the year 1162.

This town, due to the great beauty of its situation, makes it suitable for artists and excites the curiosity of archaeologists; but his reputation comes especially famous shrine of the Black Madonna, which for centuries has attracted pilgrims from all countries, including kings, bishops, and nobles.

Reyes and Louis IX of France, Henry II of England and Alfonso III of Portugal, or preachers or Domingo Antonio de Padua, marine as Jacques Cartier, the composer Francis Poulenc, unknown or famous, many have climbed the grand staircase.

The city also gives its name to Rocamadour milk cheese with denomination of origin, since 1996, which is made with a certain type of goat.

Although medieval pilgrims made ​​their way to St. Mary of Rocamadour, the new way of Santiago, elected in the twentieth century through the footpaths called GR, transformed this address in a variant of the path of Puy-en-Velay . Along this new path, you can find many carvings dedicated to the Black Madonna.

The town is a member of the association “Réseau Grands Sites de France”, but has not yet received the prestigious Grand site de France.

The buildings of Rocamadour grow upwards on the side of a cliff, right Alzou that runs in this place among rock walls up to 120 meters high. For several levels accessed from the lower zone of the city to the churches, following a path that goes through buildings leading into the cliff. The main one is the church of Notre Dame (1479 restored after a rockfall), where we can find the Black Madonna. A legend says that the statue would be a work of San Troubadour, and aided by San Lucas, why priests wanted a very old shrine origin to apostolic times. It is a statue sculpted in the XII century, the Pilgrims called Santa Maria de Rocamadour and tourists called Black Madonna because of her complexion. Outside, there is a sword stuck in the rock that is said to be the Durandal, the sword of the hero Roland.

The interior walls of the church of St. Sauveur were covered with paintings and inscriptions recall pilgrimages to famous people. Surely it was painted since it was built, but this description has the state after the restoration of the nineteenth century, with paintings of 1929 … during the past century, the population preferred to follow the fashion for bare walls and Virgin, for have a more rustic presentation. The continuous description saying that the relics of Saint Troubadour (1166) can be seen in the underground church … it was true to the same era. Today, the relics can not see, and this church became a place of worship of the Blessed Sacrament. At the top of the Roman cliff, there is the castle built in the Middle Ages to defend the sanctuaries, but a fortified wall of the fourteenth century and a castle built in the nineteenth century, with a bell tower in the next century.