Rental Car Nevers
RentaCarBestPrice.com compare prices from a number of car rental companies and find the best price on car hire. Book with us and get necessary insurance and unlimited mileage included in the price. 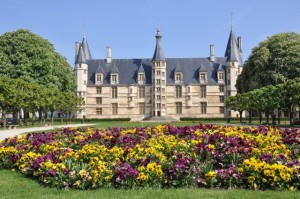 Situated at the confluence of the Nièvre and Loire. Rivers Highlights include metallurgical, chemical, machinery, textile, rubber and porcelain, this large internationally renowned industries. Circuit of Nevers Magny-Cours is a major race tracks in the country. The female character in Hiroshima mon amour, said to be originally from Nevers. In the city the pottery works.
The former ducal town of Nevers, is an art-historical city located on the banks of the Loire. Dominated by the silhouette of the Gothic cathedral houses a major architectural and artistic heritage. A walking route, the “Fil Bleu”, punctuated by panels and lecterns, invites you to discover the jewels of Nevers: the ducal palace, the cathedral of Saint-Cyr-et-Sainte-Julitte (San Quirico and Santa Julita) the Romanesque church of San Esteban, baroque chapel of St. Mary, tower Goguin, Le Croux door are some of the monuments that can be admired during his tour.

The Palace of Nevers, the former residence of the Counts and Dukes of Nivernais, was built in the late fifteenth century by Count Jean de Nevers, and is a remarkable example of civil architecture of the early Renaissance. Historical Monument, this magnificent building, adorned with sculptures, now houses the tourist office in Nevers and its region, and welcomes its many walls between exposures.

Another important building in the city is the Cathedral of Saint-Cyr-et-Sainte-Julitte. Flanked by two Romanesque choir, one in the west to the east and another gothic also notable for its magnificent modern stained glass, whose bright colors and shimmering spread a soft colored light.With 130 windows, totaling 1052 m² of stained glass, is one of the largest collections of contemporary stained glass in Europe!A colossal work, conducted by Alberola, Honegger, Rouan, Viallat Ubac and artists, which took 30 years to complete!

After visiting the cathedral, stroll leisurely tour the beautiful walls, from the imposing gate of Le Croux, vestige of the medieval enclosure, to the banks of the Loire …

Then immerse yourself in the world of arts and crafts pottery, known as master gave fame to the city in the seventeenth and eighteenth centuries with the extraordinary collection of Nevers faience (XVI to XX centuries) exhibiting the Municipal Museum Frédéric Blandin. And extend the discovery of the famous “bleus” Nevers walking around the neighborhood of artisans crockery, next to the cathedral.

Near the park Roger Salengro, Bernadette Space motherhouse of the Sisters of Mercy, enclosed in the chapel of the holy body, to which many pilgrims come to be collected, and has a museum dedicated to the spiritual life of Bernadette Soubirous.

Each year in July, the city of Nevers is of great animation thanks to street theater festival, the “ma rue d’Z’accros”.

Earth history and traditions, Nièvre, former province of Nivernais, is a natural destination par excellence, with its gentle groves field where Charolais cows graze peacefully, mysterious forests, large lakes, water courses, and numerous possibilities offered to athletes and enthusiasts of the outdoors. Nièvre region with abundant water and vegetation, has a rich secular heritage, which will delight lovers of culture and architecture, with its wide range of views, from the city historic-artistic Nevers the Cluniac priory of La Charité-sur-Loire, through ecomuseums Le Morvan and Bazoches castle.