Rental Car Chartres
RentaCarBestPrice.com compare prices from a number of car rental companies and find the best price on car hire. Book with us and get necessary insurance and unlimited mileage included in the price. 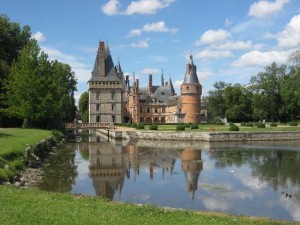 Chartres is a town and French commune located in the department of Eure-et-Loir is the capital, in the Centre region. Is globally admired its magnificent Gothic Cathedral: Cathedral of Our Lady of Chartres, traditional place of coronation of the Kings of France.

Located on the banks of the Eure River was known at different times in its history with the names of Carnutes, and civitas Autricum Carnutum.
Located 80 km southwest of Paris, in Eure-et-Loir, Chartres cathedral is the iconic monument of French Gothic art.
Symbolic pilgrimage, the cathedral and its towers dominate the city of Chartres and the Beauce plain that surrounds it. Can be seen dozens of miles away.
The building opens the series of the great cathedrals ‘classic’. This is the Gothic cathedral regarded as the most representative, the most complete and best preserved (most of the sculptures, windows are tiled and origin). It was built mostly in the early thirteenth century, in thirty years, on the ruins of an earlier Romanesque cathedral destroyed by fire in 1194.

The broader chorus of France dedicated to Marian devotion, totaling 181 representations of the Virgin sculpted nine gates, unique in Europe. Your choir, with an area of ​​650 m2, is the largest in France, 63.4 m your cruise is the longest, and the Romanesque crypt, dating from the ninth century, the largest. Your rosette diameter of 13.36 m is one of the most impressive in the world.
Lace Stone in which flying buttresses, arrow towers, pinnacles, gargoyles, roses and rosettes cross … the cathedral continues to dazzle the visitor.
An exceptional ornamental wealth.
Do not forget to admire the mysterious labyrinth inscribed in the paving of the nave between the third and fourth rows, and 176 windows that cover the largest area in the world (2600 m2) of windows of the twelfth and thirteenth centuries, particularly well preserved and known worldwide for its famous “Chartres blue”.
Notre-Dame de Chartres is home to more than 3,500 statues. Including windows, are represented in her 9,000 characters!
Do not miss.
The western facade, which is the main gateway of the religious building, and the Royal Porch. Framed by two towers, the facade has carved an important program, with 24 large statues (today, get 19) and more than 300 figures.

South tower of the cathedral is dominated by a single arrow. This arrow has been the subject of numerous reviews of artists and writers (“unique in the world,” said Charles Peguy), for the awesome feeling of ’emanation’ giving.
Is famous for its stained glass windows. The cathedral has the most important collection of thirteenth-century stained glass, remarkably well preserved to this day. Twelfth century, three windows are preserved, with its inimitable cobalt blue.
The maze, designed by the twelfth century, is a continuous path in the deployed pavement in the nave of 261.55 m, representing a succession of twists and arcs of concentric circles.
The outer crypt, the largest in France, opens onto three deep Romanesque chapels, framed by four smaller thirteenth century Gothic chapels.
The famous Chartres Cathedral and majestic, the Museum of Fine Arts and the garden of the Bishop, walking along the banks of the Eure (Place Saint-Pierre in Saint-Brice), plus a walk in the lower city with its bridges, laundries, typical houses and streets, the church of St. Andrew and St. Aignan. Not far from the cathedral is the Loens pen (old winery and stained glass museum now) files and back to the street where Chantault Eure Chartres older homes. See also the media (old post office to Art Deco architecture), and next to the church of Sainte-Foy Romanesque doorway with her. In the center, you can walk around and see some “houses” to the Swan, the former Montescot hotel instead Billiards (former seat of the earl’s castle), not forgetting the Ecuyers street leading from the center of the lower town with its old houses, doors, Flatfoot mounds and down the stairs of his queen Bertha.
The Odyssey, the largest pool complex in France! Flowing river, lap pool, spa pool, wave pool, gym, ice rink.