Rental Car Metz
RentaCarBestPrice.com compare prices from a number of car rental companies and find the best price on car hire. Book with us and get necessary insurance and unlimited mileage included in the price. 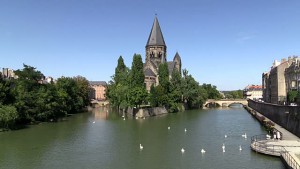 Metz is a city in the northeast of France, capital of the Lorraine and Moselle department. It is one of the cities with the highest medieval architectural heritage of France. It is a city with 140.00 inhabitants (2013).

The major nearby cities and within walking distance are Nancy, 49 miles south of Luxembourg City, 55 miles north and Strasbourg, near the German border, 60 miles east. While it is located halfway between Strasbourg and Reims and in the same way between Paris and Frankfurt.

The most important economic activities in Metz are metallurgy, trade, automotive, petrochemical and logistics.
Metz is the seat of the Chamber of Commerce and Industry of Moselle. This Centre organizes apprenticeship, the new port of Metz, Metz Mazerolle harbor and the river port of Thionville.
Metz is an important fruit-horticultural center, its specialty Mirabelle plum.

Metz, Nancy, Epinal and Thionville, is an urban center of more than one million inhabitants.

Part of QuattroPole with Luxembourg, Trier and Saarbruecken, union seeks progress and work between these cities.

Finally, Metz and Thionville in 2007 adhered to the style of the Benelux organization, the LELA, LELA renamed for the occasion. With Metz and Thionville entrance, LELA, hitherto formed by Luxembourg, Esch-sur-Alzette, Longwy and Arlon searched promote trade in the western Alps.

View of the medieval bridge of the new temple surrounded by the Moselle.

Dominique Gros, the mayor, was elected on March 16, 2008 and re-elected on March 30, 2014, after a second round facing the right candidate and the candidate of the Front National. He is the first Socialist mayor elected since the institution of universal suffrage in 1848.

In 1961, Metz 3 municipalities merged its periphery: Borny, Magny and Vallieres.

Metz is the seat of the regional council of Lorraine and therefore the capital of this one.