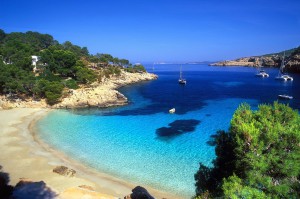 The Spanish island of Ibiza, is a famous resort for charter tourists. The island has 113,000 inhabitants (2006). The island has beautiful scenery and countless inviting sandy beaches for those looking for a sun and beach holiday.

The main town is called simply Ibiza town, located on the southeast coast of the island. The city has 37,408 residents, but when the tourists occupy the island during the summer months, the population dramatically increased. Ibiza town is divided into the old city, called “Dalt Vila” and the more modern district called “Eixample”. The old town is on a hill, and here we also find the Cathedral of Santa Maria d’Eivissa, an attraction from the 1400s. Ibiza town is known for its lively nightlife with exclusive clubs, where the party lasts until dawn. There is great shopping in town, especially when it comes to crafts and clothing.

Ibiza Airport is located just outside the center of Ibiza Town.

San Antonio is another popular tourist resort on the island, this is located on the west coast. A special attraction here is the “egg”, the monument located near the port and shall be made as a tribute to Christopher Columbus.

Ibiza is an island in the Mediterranean, 79 km off the coast of the city of Valencia in eastern Spain. It is the third largest of the Balearic islands, one autonomous region of Spain. The largest cities are Ibiza Town (Catalan: Vila d’Eivissa or simply Vila), Santa Eulalia des Riu and Sant Antoni de Portmany. Its highest point, called Sa Talaiassa (or Sa Talaia), is 475 meters (1,558 feet) above sea level.