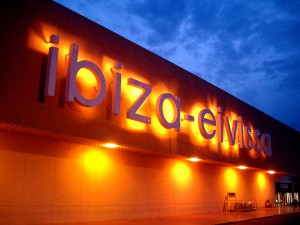 Ibiza Airport (IBZ) is located 7 km southwest of Ibiza Town. The buses run between Ibiza Airport and the city. The rental cars are present at the airport is Auriga Crown, National Atesa, Avis, Europcar and Hertz.

4,647,487 passengers visited Ibiza Airport in 2008. It is headquarters for the airline Vueling. About 9 different airlines serve the airport with destinations to about 25 different locations in Europe. The airport was first opened and used as a military airport during the Spanish Civil War (1936-1939).

Ibiza is an island in the Mediterranean, 79 km off the coast of the city of Valencia in eastern Spain. It is the third largest of the Balearic islands, one autonomous region of Spain. The largest cities are Ibiza Town (Catalan: Vila d’Eivissa or simply Vila), Santa Eulalia des Riu and Sant Antoni de Portmany. Its highest point, called Sa Talaiassa (or Sa Talaia), is 475 meters (1,558 feet) above sea level.