Rental Car Frankfurt
RentaCarBestPrice.com compare prices from a number of car rental companies and find the best price on car hire. Book with us and get necessary insurance and unlimited mileage included in the price. 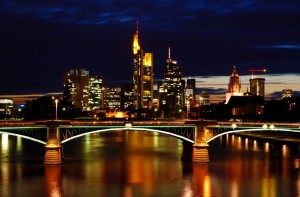 Frankfurt is located in the central German state of Hesse – and with it’s 670,000 inhabitants (1.8 million in metropolitan area) Germany’s 5th largest city. It is often called Frankfurt am Main in order to avoid confusion with the considerably smaller city of Frankfurt an der Oder, which is situated east along the border with Poland. As the name says, the river flows Main through town.

Large parts of Frankfurt’s central neighborhoods were destroyed during WW2 – eg the historic center. Therefore, it is little old architecture left in the city. It appears primarily as a bustling, modern metropolis – and it is also one of EU’s most important financial centers.

Among the most famous attractions of the city’s Alte Oper, Frankfurt’s Old Opera House, which until World War 2 was one of Germany’s most prestigious. After the war, it has been rebuilt as a concert hall – while the opera since 1951 has lived in a new building (Neue Oper). Otherwise, Frankfurt nearly 20 different museums – including an architectural museum, a film museum, several art museums and a museum of Jewish culture and history.

It should otherwise be noted that Frankfurt is one of Germany’s busiest shopping cities.

The city’s international airport – Frankfurt Airport (FRA) is 12 kilometers southwest of downtown, and is one of the busiest airports in Europe. Both terminal buildings have car centers available – where actors Avis, Hertz, Alamo, Budget, Enterprise, Sixt, National and Advantage housed.

Germany has well-developed infrastructure and excellent roads. It’s easy to adapt your driving style. Germany’s highways (“Autobahn”) has no set speed limit, but it is not advisable to drive faster than 130 km / h.

Germany has a blood alcohol concentration limit of 0.5. For drivers under 21 years the limit is 0.0.

The highways in the country have no toll fee.

In Frankfurt there may be heavy traffic in rush hour, and it can also be difficult to find parking space in the center. However, there are several large parking lots and parking facility just outside the center.

Car hire in Frankfurt is perfect when you want to explore the area outside the center of Frankfurt, and maybe take a little longer day trips in the region. There are many nice places to drive to – whether you will experience beautiful scenery, idyllic villages or bustling cities.

Mainz is one of the oldest cities in Germany and is located on the Rhine river – only 44 km southwest of Frankfurt. Mainz has 204,000 inhabitants and is famous for its historic center. Here you can visit Mainz Cathedral, which originally was completed in the 1000s. Also St.Stephan Church recommended a visit, where one can see stained glass windows by Marc Chagall.

The city is also home to the famous Gutenberg Museum, dedicated to the art of printing.

With a rental car, you can also take a daytrip to the city of Heidelberg – which is 90 km south of Frankfurt. Heidelberg is a university city with approximately 143,000 inhabitants and is beautifully situated by the river Neckar. Just off the city’s mountains Königsthul, which measures 567 m The biggest tourist attraction in town is Heidelberg Castle, where the oldest part dates from the 1300s. The castle is located on a hill in the old town. Other attractions include Arc de Triomphe “Karlstor” from 1781 and the old stone bridge in 1788 – with a broport medieval.
Heidelberg is a popular tourist destination due to its romantic and picturesque cityscape, and receives 3.5 million visitors each year.