Rental Car Frankenthal
RentaCarBestPrice.com compare prices from a number of car rental companies and find the best price on car hire. Book with us and get necessary insurance and unlimited mileage included in the price. 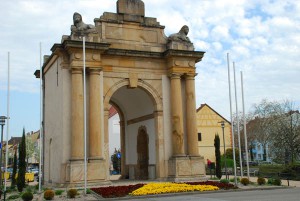 Frankenthal, which has about 47,000 inhabitants, situated on the Rhine tributary Isenach in the southwestern part of Germany – specifically in the state of Rhineland-Palatinate. The distance to bigger cities like Worms in the north and Mannheim in the southeast is in both cases 15 km.

Frankenthal is first mentioned in historical sources from the late 700s – and it became a town in 1577.

The center, however, was almost totally destroyed during the allied bombardment in 1943. Therefore, today’s Frankenthal very few historic buildings to show off. Some ruins are still preserved, and these are among the main attractions. This applies particularly the former abbey church St. Mary Magdalene (also known as Archbishop Bert-ruins). Close liger Archbishop Bert Museum, where the city’s history is documented.

The only thing in the old center that was destroyed during World War 2, the two triumphal arch-like gates Wormser Tor and Speyerer Tor (both listed at the beginning of the 1770s). Otherwise, there are a couple of beautiful, reconstructed churches: Pfarrkirche St. Dreifaltigkeit (baroque church from the early 1700s) and Zwölf-Apostel-Kirche (1600), which has the highest church tower.

City Airport Mannheim is 13 km southeast of Frankenthal. It is a regional airport with regular routes to Berlin and Hamburg. Nearest international airport is Frankfurt Airport, aprrox. 90 km further north.