Rental Car Fortaleza
RentaCarBestPrice.com compare prices from a number of car rental companies and find the best price on car rental. All prices on car hire in Fortaleza include necessary insurance and unlimited mileage. 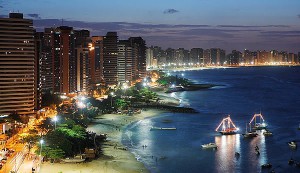 Fortaleza is a popular city located on the country’s west coast in the north. The city has an important fishing port that leads out into the Atlantic and live on industry and tourism. Fortaleza is the state capital of Ceará and is the fifth largest city in the country. The population of Fortaleza in 2009 was estimated at over 2 500 000. The city was founded in 1609 by the Portuguese and was early known for sugar plantations.

Fortaleza is today best known for being a tourist town in addition to the export of goods like sugar, coffee, room and fruit. Both Brazilians and foreign tourists visit the city because of the 90 km long sandy beaches and a tropical climate with around 30 degrees Celsius all year. Fortaleza Cathedral was erected in the mid 1900s and is the third largest church in Brazil. There are opportunities for guided tour of the old fortress city grew up around as well as a museum.

Fortaleza International Airport Pinto Martins was opened in 1998 and is about 10 km from the center.