Rental Car Manaus
RentaCarBestPrice.com compare prices from a number of car rental companies and find the best price on car rental. All prices on car hire in Manaus include necessary insurance and unlimited mileage. 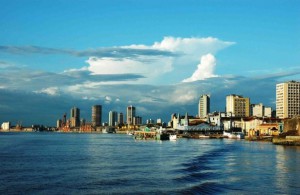 Manaus is located centrally in the northern part of Brazil. The city lies on the banks of the river Río Negro running together with the Amazon River for 15 km. The town was founded in 1669 and grew towards the end of the 1800s because of the rubber plantations. Today there live about 1.7 million inhabitants in the city (2009). Manaus is surrounded by jungle and is the only city in a radius of 1,000 km.

Manaus is known because of the port and its location by the jungle and the world’s largest river. Some of the most famous tourist attractions are boat trips along the river and trips into the jungle. In the city there are many parks and green spaces, including a botanical garden and a zoo. Also several of the beautiful buildings are worth seeing itself, including the renowned opera house from 1896. Along the Río Negro there are many seaside resorts which are popular among residents and visitors.

Eduardo Gomes International Airport is a major airport, which lies 14 km outside of Manaus.