Rental Car Ecuador
RentaCarBestPrice.com compare prices from a number of car rental companies and find the best price on car hire. Book with us and get necessary insurance and unlimited mileage included in the price. 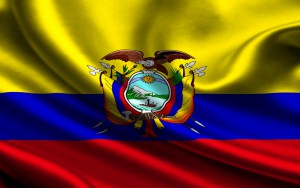 Ecuador, northwest of South America – right at the Equator, and has 14.6 million inhabitants (2009). The country has coastline to the Pacific Ocean to the west, and bordered by Colombia to the north and Peru to the east and south. The country also includes the Galapagos Islands in the Pacific Ocean, located 1000 km west of the mainland.

The landscape consists roughly of the highlands in the north, the coastal areas in the west, and tropical rain forests in the east. The highest point is Chimborazo, located 6267 m Ecuador has a tropical climate in the lowlands on the Pacific coast and a temperate climate in the highlands.

The capital Quito is located in Northern Highlands – 2800 m – And has about 1.4 million inhabitants. Quito is Ecuador’s second largest city after Guayaquil.

The town lies at the foot of the active volcano Pichincha, and from the center you can take the cable car “Teleferiqo» up to a lookout point on the volcano’s eastern side. Old Town in Quito UNESCO World Heritage site, with several well-preserved historic churches and buildings.

The nation’s largest city is Guayaquil, located 250 km southwest of the capital. The city has 2.6 million inhabitants (2009) and is located near the Pacific coast. Guayaquil, the country’s main port, and is also an important commercial center.

The permitted blood-alcohol level is 0.07%.

Traffic moves on the right side of the road and overtaking is on the left side.
To drive motor vehicles, a person must be over 18 years of age.
while driving, all car occupants must use seat belts.
Motorcycle riders must wear helmets.
Car insurance is mandatory.

To rent a car, a driver normally has to be 25 years of age. A valid driver license with a driver’s photo may be accepted; otherwise, an International driving permit is necessary.
Drivers always should be aware of cyclists as they don’t have special lanes only for them and are common on the roads.
At traffic lights, drivers always should wait until the light has turned green before going; many drivers sometimes instead of braking accelerate when the light turns yellow.

Search and find a car in Ecudador using the search engine above. The booking takes place in few easy steps and takes no more than 5 minutes.