Rental Car Ambato
RentaCarBestPrice.com compare prices from a number of car rental companies and find the best price on car rental. All prices on car hire in Ambato include necessary insurance and unlimited mileage. 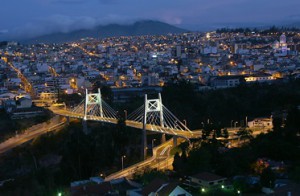 Ambato belongs to the province Tungurahua, where it is the provincial capital. The city is centrally located in the middle of Ecuador, about 110 km from the capital Quito. Ambato is located on the banks of the river Ambato and at the foot of the extinct volcano Chimborazo. The city is famous for the production of goods such as textiles, and is called “Ecuador’s garden” because of the rich orchards at the very edge of town. Ambato was founded in 1698, and its population is currently at slightly over 350,000 (2007).

If in Ambato on Mondays, one should pay a visit to the market which is the largest sales market in the country. In February held the carnival and festival which in English is called the Festival of Fruits and Flowers. La Catedral is one of the most famous sights of the city and was built in the 1950s. In the same place it has been several cathedrals since the 1600s, but these have been destroyed in earthquakes.

Chachoán Airport is an airport that offers flights domestically and is approx 20km outside of Ambato.