Rental Car Cordoba
RentaCarBestPrice.com compare prices from a number of car rental companies and find the best price on car rental. All prices on car hire in Cordoba include necessary insurance and unlimited mileage. 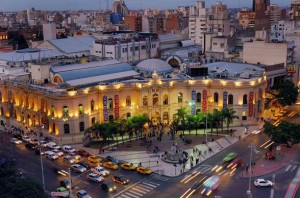 Cordoba is Argentina’s second largest city and capital of the province of the same name. In 2007 the population measured at over 1 400 000. The city is located in the middle of Argentina, a little further north than the south, and rests at the foot of the mountain Sierras de Córdoba. The town was founded in 1573 by the Spanish colonists and named after Cordoba in Spain.

Cordoba is almost 500 years old and was at the time one of the most important cities of the Spanish colonists. There are still many buildings from the Spanish colonial period, including the University Universidad Nacional de Córdoba founded in 1613. The university is located in the area in Cordoba called Manzana Jesuitica, and here there are also several other buildings from the 1600s. In 2000 the area was listed as a UNESCO World Heritage list.