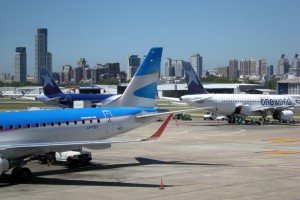 Aeropuerto Internacional de Ezeiza “Ministro Pistarini ‘(EZE) is located 22 km southeast of Buenos Aires. The airport is named after General Juan Pistarini but is primarily known as Ezeiza. There is very poor public transport between the airport and Buenos Aires, so taxis are a good option. There are four car rental companies at the airport which is just off the entrance area of ​​Terminal A, there are Alamo, Avis, Hertz and Localize.

There is a decent range of cafes, restaurants, bars and shops in Buenos Aires Ezeiza Airport. There are tax free both at departure and arrival. Other amenities include ATM, pharmacy and medical center. The nearest hotels are located in Buenos Aires .