Rental Car Buenos Aires
RentaCarBestPrice.com compare prices from a number of car rental companies and find the best price on car rental. All prices on car hire in Buenos Aires include necessary insurance and unlimited mileage. 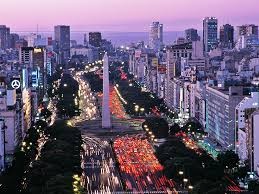 Buenos Aires is the capital of Argentina and its population within city limits was in 2001 measured at 2776 100. The number will almost quadrupled if one takes the city’s suburbs and measure when about 11, 5 millions (2002). Buenos Aires is located near the east coast of the Latin American continent and on the west bank of the river Rio de la Plata.

The Spanish colonial period from 1516 to 1816 left its mark on Argentina and Buenos Aires, and culture enthusiasts can search information in one of the city’s countless museums. Other popular attractions is the famous building and Government House Casa Rosada where Evita gave speeches from the famous balcony. Buenos Aires is considered the world capital of tango and tango festivals held each year.

J. Newbery Aero Park Airport, Comandante Espora Aero Station Airport and Ezeiza Ministro Pistarini International Airport is Buenos Aires’ three airports and all have international flights. Yet it is only Ezeiza, 34 km outside the city, which has flights to Europe and North America.