Rental Car Brasilia
RentaCarBestPrice.com compare prices from a number of car rental companies and find the best price on car rental. All prices on car hire in Brasilia include necessary insurance and unlimited mileage. 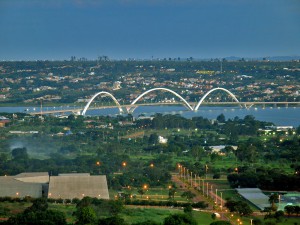 Brasilia is the capital of Brazil bordering the Atlantic Ocean to the east. The capital is in a savannah area in the middle of the land, and the coastal city of Rio de Janeiro is located almost 1,000 km southwest of the capital. Brasilia was built in the late 1950s and is known for modern architecture. In 2008, the population of Brasilia measured at 2.5 million.

Architect Oscar Niemeyer is behind many of the city’s modern and beautiful buildings, and the Cathedral Nossa Senhora Aparecida is one of his masterpieces can be visited north of Brasilia. One of the most visited attractions in town, JK Memorial. This is the tomb of former President Juscelino Kubitschek who started building the project in 1956. Otherwise, it is worthwhile to pay a visit to the zoo Jardim Zoológico de Brasilia, or one of the city’s many museums.

Brasilia International Airport – Presidente Juscelino Kubitschek is the name of the capital’s airport with a location about 11 km outside the city center.