Rental Car Zadar
RentaCarBestPrice.com compare prices from a number of car rental companies and find the best price on car rental. All prices on car hire in Zadar include necessary insurance and unlimited mileage.

You on vacation in the beautiful Croatian city of Zadar? Perhaps you plan to rent a car during your stay, so you can see more of the Dalmatian? There are many great places to explore outside the city of Zadar, and you do not have to depend on public transport. It is advisable to book your car rental well before departure to Zadar, then the best car rental deals are taken first. 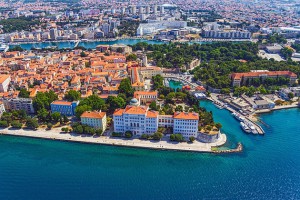 Zadar is a port city located in central Croatia – about 200 km southwest of the nation’s capital Zagreb. The city is beautifully situated at the Adriatic coast, and has about 75,000 inhabitants. The main tourist area with beautiful beaches, hotels, restaurants and shops are located slightly off center.

Old Town has 34 ancient churches and is located on a peninsula. All churches have a rich history. The oldest is St.Sime. In Zadar there are ruins of a Romanesque forum, and the city has several historic buildings that Anastasia’s Cathedral and St. Mary’s Church from 1091.Universitetet from 1396 is one of Europe’s oldest. Zadar is famous for its liqueur factory that produces maraschino. The waterfalls in Plitvice National Park is located near Zadar. The town has several cafes. Visitors can swim in the clear water or rent a boat here.

Nearby attractions Zadar’s square “People’s Space” from the 1500s with a number of beautiful buildings and harbor promenade with “Organ” and “Solsirkelen”. The city has otherwise an art museum and an archaeological museum and several parks.

Airport
Zadar Airport (ZAD) is an international airport located 12 km southeast of downtown. The airport serves 495,000 passengers annually (2014), and has significant charter traffic in the summer.

A wide range of car operators have their offices at the airport – including Lulic, Fleet, Filipovic, Avia, Hertz, Air, Sixt, National, Uni, Europcar and Alamo.

Traffic
Croatia has a well-developed road and it goes motorway from Zagreb to Split in the north to the south (A-1). Motorway network passing Zadar, and will be developed further south to Dubrovnik. The highways are of a high standard, and is taxable.

The alcohol limit in Croatia is 0.5.

Kjørekultuen in the country is more aggressive than in Scandinavia, and in the main towns there is heavy traffic and congestion during peak times.

Arrive at Zadar with car rental, it is advisable to check with the hotel beforehand if they offer parking for its guests. Otherwise, there are parking spaces and a parking garage in the city center. In the old town there are few places to park, and it is recommended to use the car park just outside the old city walls.

Driving Tips
With car hire in Zadar one can take pleasant day trips in the region, completely at their own pace. The beautiful Dalmatian coast stretches from Zadar and south to Dubrovnik, and along the coast are picturesque fishing villages such as pearls on a string.

It can be recommended to drive to the island Vir, located 28 km north of Zadar. The island is linked by bridge and is a popular tourist area in summer. Here you’ll find beautiful beaches, hiking trails, cliffs and small bays along the coastline. On the island live approximately 3,000 residents, and there is a good selection of cafés, restaurants, shops here.

In Kozjak cove on the island Vir we can see the old fortress “Throw Lina” from the 1700s, and another attraction is the lighthouse from 1881. There are also several old churches on the island.

On the way to or from the island of Vir, one can take a stop in the small town of Nin, located 17 km north of Zadar. Cathedral of Nin is a major tourist attraction, and was built in the 800s. This is the world’s smallest cathedral.

Another driving tip is to take a day trip to Plitvice National Park, located 118 km northeast of Zadar. Plitvice is considered one of Europe’s most beautiful national parks and the area consists of beautiful green and turquoise lakes, high mountains, forests and waterfalls. The National Park also has a rich animal and bird life, and there are several hiking trails to choose from. The hiking trails are well maintained, and some are wheelchair accessible. At the main entrance are café and souvenir shop.