Rental Car York
RentaCarBestPrice.com compare prices from a number of car rental companies and find the best price on car hire. Book with us and get necessary insurance and unlimited mileage included in the price. 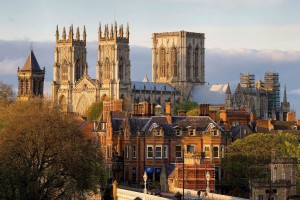 York belongs to the county of North Yorkshire and is located in the country’s northeastern part. The city is located where the two rivers Ouse and Foss meet, and it is about 35 km to Leeds in the southwest. York was founded by the Romans already this year 71 AD. Under the name Eboracum. This year, 866 took the Vikings city and called it Jorvik, and from the 1200s, the name York adopted.

There are many remains and buildings that testify to the city’s long history. Parts of the city wall which was built in the Middle Ages still stands. Many churches have been preserved, including Northern Europe’s largest gothic cathedral York Minster. York Dungeons is a scary experience that takes place deep in the cellars of York Prison. It organized various tours of the city and that there are many museums here, as Jorvik Viking Centre.

Leeds Bradford International Airport is the largest airport in Yorkshire and is approx 50 km outside York.