Rental Car Winnipeg
RentaCarBestPrice.com compare prices from a number of car rental companies and find the best price on car rental. All prices on car hire in Winnipeg include necessary insurance and unlimited mileage. 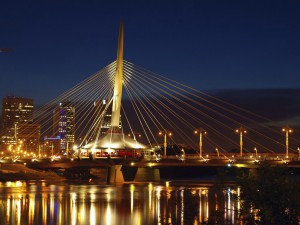 Winnipeg is located in the southern part of the province of Manitoba in Canada. It borders the United States in the south, and it is a little over 100 km from Winnipeg to the border. The town lies at the confluence of the rivers Red and Assiniboine, and this point is also called The Forks. Winnipeg is the largest city and capital of the province, and in 2008 the number of inhabitants measured at over 630 000.

The French were the first Europeans who came to the area in 1738. Visitors can learn a lot about the city’s history by visiting various historic attractions. Fort Gibraltar and the Maison du Bourgeois is a historical museum, open from May to August, while the Lower Fort Garry National Historic Site of Canada is a historic place for the fur trade. The city is known for its many festivals, including Canada Inns Winter Wonderland, Folklorama, Jazz Winnipeg Festival and Manito Ahbee Festival.

The official name of the airport’s Winnipeg James Armstrong Richardson International Airport is approximately 8 km outside the city center.