Rental Car Unna
RentaCarBestPrice.com compare prices from a number of car rental companies and find the best price on car hire. Book with us and get necessary insurance and unlimited mileage included in the price. 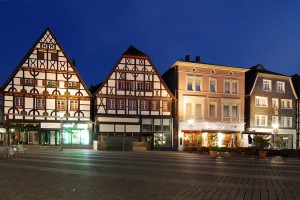 Unna is a town with approximately 70,000 inhabitants (2008), located west of Germany – in the state of North Rhine-Westphalia. In medieval times, the city had a central location on the so-called Hellweg – the main route between east and west through Germany.

One of the city’s historical attractions is the Burg Unna – originally built in the 1400s, but rebuilt 400 years later. Borgen currently houses a municipal museum (Hellwegmuseum). Otherwise you need the evangelical Stadkirche, where the oldest part is from 1322, cited as another of the sights. Moreover, there are numerous well-preserved half-timbered houses, erected between the 1500s to the 1800s, in the Altstadt (old city). Along the east side of the Altstadt is also part of the old city wall preserved.

A spectacular attraction of recent date is Zentrum für Internationale Lichtkunst, which was opened in 2001. It is located in a disused brewery, is – as the name says – a museum of light art / lighting design. Central to this system is the light set, 52 meters high, a former brewery chimney. And 10 meters below ground is the exhibition room, where experiments with light and shadow creates a mysterious, “magical” atmosphere.