Rental Car Ulm
RentaCarBestPrice.com compare prices from a number of car rental companies and find the best price on car hire. Book with us and get necessary insurance and unlimited mileage included in the price. 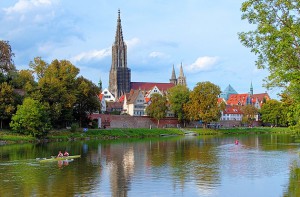 Ulm, which has about 120,000 inhabitants (2008), located on the river Danube – in the southern German state of Baden-Wurttemberg. On the other side of the Danube (but in the state of Bavaria), we find the neighboring town of Neu Ulm (New Ulm) – and together live about 170,000 people in the “twin cities”. Originally, Neu Ulm a district of Ulm, but in 1810 became the cities divided between the ancient kingdoms of Wurttemberg and Bavaria.

Ulm is first mentioned in historical records in the year 854 AD – And the city had until 2 World War II a number of preserved buildings from the Middle Ages. Approximately 80% of these were however destroyed during WW2. Some are rebuilt / restored in the postwar period.

By far the most famous attraction in Ulm’s cathedral Ulmer Münster, which has the world’s highest church tower (161.5 meters). To reach the top you have to force a total of 753 steps. From the top of the tower you can see all the way to the Alps. The cathedral was built in 1377, but not finally completed until 1891.

Among the other historic sights in Ulm, the following are mentioned: Das Steinhaus (the city’s oldest building, built around 1200) and Gänsturm (listed in 1360, the body type in 1445) – part of the city’s ancient fortifications. This tower is almost as crooked as the Leaning Tower of Pisa. Also the town hall must be included among the main attractions – a building that was originally built as a merchant’s house in 1370.