Rental Car Tournai
RentaCarBestPrice.com compare prices from a number of car rental companies and find the best price on car rental. All prices on car hire in Tournai include necessary insurance and unlimited mileage. 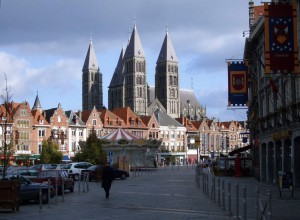 Just 10 km from the border with France, you will find the Belgian city of Tournai on the River Scheldt. Tournai belongs to the province Hainaut west of Belgium with about 68 000 inhabitants (2008). Tournai is one of Belgium’s oldest cities and was founded by the Romans in the 1st century AD.. under the name Turnacum. In Dutch called city Doornik.

For tourists who visit Tournai, there is much culture to experience, and Tournai is considered to be one of Belgium’s richest cultural cities. Many ancient and magnificent structures can be seen here, including Notre Dame de Tournai which was built between 1146 and 1325 Belfry is the oldest clock tower in Belgium and was erected in 1187. Both sites are listed on the UNESCO World Heritage list. Ever since 1092 has procession Grande Procession taken place in the city center.

The nearest airport for public traffic route is the one that is in the French city of Lille, 20 km from Tournai. The official name is Lille-Lesquin Airport.