Rental Car Toronto
RentaCarBestPrice.com compare prices from a number of car rental companies and find the best price on car rental. All prices on car hire in Toronto include necessary insurance and unlimited mileage. 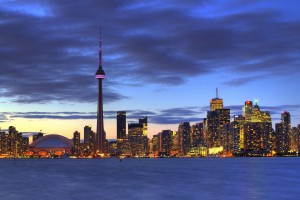 Toronto is the largest city in Canada with a population of over 2.5 million in 2006. Projected by the number of inhabitants in the suburbs too, increases the number by another 2500 000. Toronto is the capital of the province of Ontario which is near the US border. The town lies on the western shore of Lake Lake Ontario.

Toronto grew to a town around a French fort built in 1749, today the city is a modern financial and cultural center. The cityscape is characterized by historic buildings and skyscrapers as well as several parks. Many travel to Toronto because of winter sports and the many food and beverage outlets specializing in hot chocolate. Bowmanville Zoological Parc is Canada’s oldest zoo and was established in 1919. Today, visitors can experience activities like elephant riding, feeding the lions and variety shows.

Toronto Pearson International Airport is the largest and busiest airport in Canada with over 30 million passengers in 2008. The airport is approximately 30 km outside the city.