Rental Car Tirana
RentaCarBestPrice.com compare prices from a number of car rental companies and find the best price on car rental. All prices on car rentals in Tirana include necessary insurance and unlimited mileage. 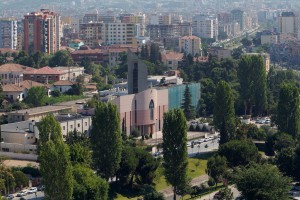 Tirana is the capital of Albania and is located about 40 km from the country’s coast. Albania borders the Adriatic Sea to the west and the river Ishema runs through town. Tirana is centrally located in the country, and it is about 130 km to Macedonia’s western border. Tirana was founded in 1614 and appointed to public capital in 1925. The population of the city is approximately 375 000 (2007).

Tirana is a beautiful and lush metropolis with growing tourism. The 1990s were the statues of Stalin and Lenin removed and the old communist blocks undergoes a vigorous renovation. Old Town is a popular attraction with its narrow streets and old buildings. The modern attraction International Center of Culture is also called Piramida because of its pyramidal shape. In the city center you can visit the National History Museum and the mosque Et’Hem Bey is one of the most beautiful mosques in the country.

Mother Teresa Airport is an international airport which flies to many parts of Europe and is approximately 17 km outside the city center.