Rental Car Split
RentaCarBestPrice.com compare prices from a number of car rental companies and find the best price on car rental. All prices on car hire in Split include necessary insurance and unlimited mileage.

If you are going on holiday to Split in Croatia, you may want to see more of the region? With car hire in Split do not need to be dependent on public transport, and one can take pleasant day trips at their own pace. It is popular to rent a car in Croatia, and the country has many great places to visit, which can not be reached by public transport. It is advisable to rent a car home in good time before departure to Split. This is especially true during the summer when demand is high and there is great demand for the cheapest rental cars. 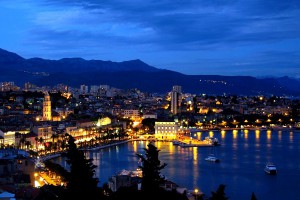 Split is Croatia’s second city. Split is situated on a peninsula in Dalmatia on the Adriatic. The city has 189,000 inhabitants and is a port city. Here are boat connections to Hvar, Rijeka and Ancona, inter alia,

Split is a seaside resort, and has ruins from the Roman Emperor Diocletian’s Palace from the 300s. In the palace lies the mausoleum St. Dujes Cathedral from 305 AD.., The world’s oldest cathedral and the Temple of Caesar. It has been used as a church since the 800s, and is now baptistery. The palace and parts of the city are on the UNESCO World Heritage List. Split has a great archaeological museum, City Museum, maritime museum and a zoo. Six kilometers north of Split is the ancient Salonae, which was destroyed by the Slavs in 640 AD Split has several beaches with lively cafeliv and markets. Split is a good starting point for sailing trips in the Adriatic.

Traffic
Should you run into the center of Split, one should be prepared for big rush traffic in the morning and the afternoon. Roads in Croatia is reasonably well maintained, but in some places the roads are narrow. It goes highway from Split to Zagreb in the north and to Ravca in southeast (A1).

Driving Tips
With car hire in Split one can take a drive to the small medieval town of Trogir, which is situated 29 km west of the center of Split. The whole historical center of Trogir is a UNESCO World Heritage Site. Here you will find narrow alleys, cobbled streets, cozy cafés, small shops and town walls with towers and spiers. The beautiful St. Lauretius Cathedral from 1251 is one of the city’s major tourist attractions. It is also great swimming in Trogir bit outside the old town.

Another option with car rental, is to take a day trip to Dubrovnik, located 229 km southeast of Split. Dubrovnik is located at the Adriatic coast in the very southernmost part of Croatia and is famous for its beautiful architecture.

The Old Town of Dubrovnik has since 1979 been listed as a UNESCO World Heritage Site, and is surrounded by city walls from the 1400s. In the old town’s many historic sites – including Cathedral from 1671, paved Stradun, Sponzapalasset from 1522 and Rector’s Palace from the 1400s, which today houses the town museum.

Visitors should also take the cable car up to the top of the mountain Srd, located 415 m From here you have a gorgeous panoramic view of Dubrovnik and its surroundings.