Rental Car Sibenik
RentaCarBestPrice.com compare prices from a number of car rental companies and find the best price on car rental. All prices on car hire in Sibenik include necessary insurance and unlimited mileage. 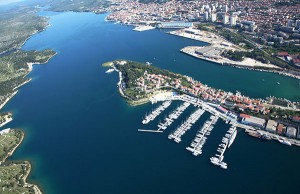 Sibenik is 75 km north of Split in Dalmatia in south Croatia. The city lies on the River Krka expiration of the Adriatic. 37,000 people live in the city center, while the municipality has a total of 52,000 inhabitants (2001). From there are boat connections to Kaprije and Zirje.

Šibenik was granted city status in 1298. The city came under Venetian rule in the 1400s The city of St. James Cathedral is on UNESCO’s World Heritage list. It was begun in the 1500s. St. Nikolaus-fortress of the same century is situated on a headland outside Sibenik, and are well preserved. It was set up as protection against Turkish ships, and designed by architect Hyeronimus di San Michaela. During the civil war from 1991 to 1995 there was heavy fighting between Yugoslav Serb and Croat forces in short periods of Sibenik. Then fell the dome of the cathedral and several other buildings were severely damaged. A few kilometers north of the town is the beautiful Krka National Park and Lake Plitvice. Here there are waterfalls, and archeological ruins.