Rental Car Sheffield
RentaCarBestPrice.com compare prices from a number of car rental companies and find the best price on car hire. Book with us and get necessary insurance and unlimited mileage included in the price. 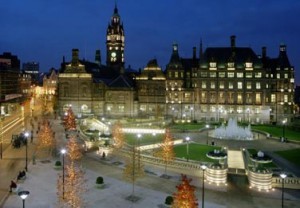 Sheffield is a city in the county of South Yorkshire which is situated in the heart of England, a little further north than the south. It is about 60 km to Manchester which is located in the northwest. Sheffield stands beside the River Don, near the place where Don runs with four smaller tributaries. In 2008 the population measured at over 530 000 within city limits. The town began to grow in the 1000s and became a great and famous knife manufacturer.

Sheffield is considered to be the greenest city in the country, and here there are numerous parks of various kinds. The botanical garden Victorian Botanical Gardens should pay a visit in addition to the National Park Peak District National Park. The National Park is Britain’s oldest and largest, and here is the small, historic villages that must be experienced. The city limits also with many museums, theaters and many art galleries. Churches St. Peter and St. Paul stems from the 1100s.