Rental Car Middlesbrough
RentaCarBestPrice.com compare prices from a number of car rental companies and find the best price on car hire. Book with us and get necessary insurance and unlimited mileage included in the price. 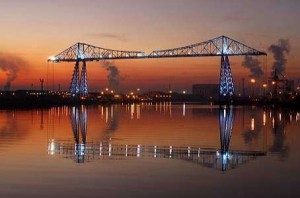 Middlesbrough is a town that belongs to the English county of North Yorkshire. The town is near the English east coast in the north and is located at the south bank of the River Tees. It is only 11 km to the river’s outlet in the North Sea and Middlesbrough started to grow in the 1800s because of the port and industrial operations. Before the industry reached Middlesbrough in the mid-19th century, there were only a few farms in the area. Today the population of over 140,000 (2008).

As Middlesbrough was founded in 1830, few old buildings in the city. One of the buildings from the 1800s are the old town hall and Ormesby Hall. The explorer Captain James Cook was from Middlesbrough and consequently there are several sites about this man, including the Captain Cook Birthplace Museum. The city also offers beautiful parks with various facilities such as Stewart Park and Pallister Park, in addition to the nearby national park North York Moors.

The city’s nearest airport is Durham Tees Valley Airport is located about 16 km outside the city center.