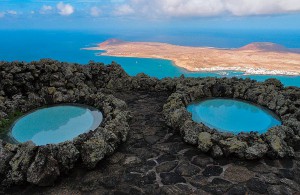 Lanzarote is the easternmost of the autonomous Canary Islands, in the Atlantic Ocean approximately 125 km off the coast of Africa and 1,000 km from the Iberian Peninsula. Covering 845.9 square kilometers (327 sq mi), it is the fourth largest of the islands. The first recorded name for the island, given by Angelino Dulcera, was Insula de Lanzarotus Marocelus, after the Genoese navigator Lance Lotto Malocello, from which the modern name is derived. The island’s name in the native language was Titerro (y) GATR, which may mean “the red mountains”.

Lanzarote is the easternmost of the Canary Islands and also this island is of volcanic origin. Modest 140,000 (2008) live on the island, of which about 60,000 live in the capital Arrecife.

Beautiful white beaches are in stark contrast to the dark and thrilling volcanic landscapes and a trip to the world’s longest volcanic tunnel, Atlantida Tunnel, is mandatory.

The island is perhaps best known for its sporting character, but there is plenty to find on without tennis and windsurfing. The Playa Blanca, which incidentally means ” White Beach ” in Spanish and Papagayo on the south side invites to long lazy days, while the National Park Timanfava offers beautiful natural surroundings of the capital.

Do not miss the local specialties such as tapas and traditional paella. Rinse down with a delicious glass of wine, grown in volcanic ash that creates a particularly sweet aroma.

Lanzarote has its own international airport, Arrecife airport.