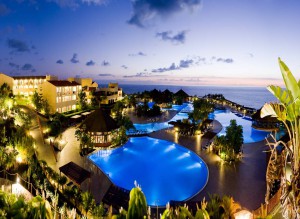 On the island of La Palma, the most north-westerly of the Canary Islands, here live more than 80,000 people in its 708 square kilometers. Of its inhabitants, the “clappers”, say “never hurry” and that are “friendly people”. Here people like to think so and try to be consistent with it. In these times in which everything is “fast and for this moment,” we like to take life without stress and have the ability to govern, at least a little on the clock.

In La Palma, the distances in kilometers not reflect correctly the distances. Here everything we measure in time: – “How long does it take?”. Since the most part of east, Santa Cruz de La Palma, to the west, Tazacorte, it takes about 45 minutes drive and from the north, Villa de Garafía, to the south, Fuencaliente, approximately two hours . This clear, without being “lost” by those charming corners or imbibe the landscape, which for those who are on vacation is most common.

The highest point of the island is the Roque de los Muchachos (2.426m), one of the places that most interest arouses our visitors. There is one of the most complete sets of telescopes in the world -The Observatory of the Roque of the boys, but also a fantastic view of the Caldera de Taburiente National Park is contemplated.

The temperature in the Palma is usually smooth. The green mountains realize it, so occasionally has to rain. Depending on the time of year, we advise you bring appropriate clothing, a shirt and a coat that you can take and put depending on time of day.

In 2002, the entire island territory of the island of La Palma was declared “World Biosphere Reserve” by UNESCO. This was largely contributed its variety of landscapes, since it’s a different behind every bend in the road: lava flows that intertwine with lush pine forests, deep ravines and high cliffs, small coves of black sand covered peaks laurisilva, and at some point, the herd of goats crossing the road.

La Palma is since 2006 the first in the world to be declared “Sustainable Tourist Destination”. We want our visitors feel at home, “a palmero more” to know our traditions, participate in the festivities (the Bajada de La Virgen, Los Indianos, Crosses, Corpus, etc.), and above all live a memorable experience of your holiday on the island, which in turn can help us to preserve it for future generations.