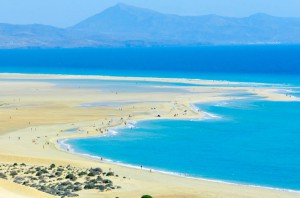 Fuerteventura island has 86,642 inhabitants (2004). Previously, the island’s livelihoods in agriculture and fishing, but today derives revenues primarily from tourism. Along the Fuerteventura’s coastline is picturesque towns with their small churches and chapels. Old windmills is also a characteristic feature of the island.

Fuerteventura has pleasant temperatures all year round, this makes sun and beach are the main activities of the tourists on the island. The long, sandy beaches and crystal clear waters ideal for swimming, but also diving and windsurfing are popular activities. The island’s capital called Puerto del Rosario has approximately 28,000 residents.

The airport, Fuerteventura Airport is located at this city. It also, inter alia, an outdoor sculpture park with 80 different sculptures, which are well worth a visit.

The capital is also known for having the best nightlife on the island. Fuerteventura is a family friendly island with several theme parks that draw. You can go on a camel safari, visit the zoo or try water slides found at water parks.

Fuerteventura can be loosely translated as “strong wind” or a corruption of the French Forte Aventure (Great Adventure) is one of the Canary Islands, in the Atlantic Ocean off the coast of Africa, politically part of Spain. At 1,660 square kilometers (641 sq mi) is the second largest of the Canary Islands, after Tenerife. It was declared a biosphere reserve by UNESCO on 26 May 2009.