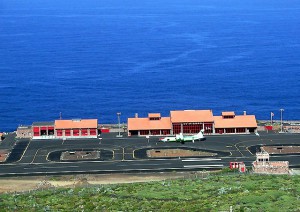 El Hierro Airport (IATA: VDE, ICAO: GCHI) is an airport located 9 km (5.6 mi) northeast of Valverde. It is the only existing airport on the Island of El Hierro, Spain. It was inaugurated on December 1972 and it is called Aeropuerto de los Cangrejos.

However, in spite of its size and its limited timetable, it was the airport which had the greatest increase in number of passengers and merchandise in the Canary Islands in 2007.

The air traffic is national, and the flights are normally from/to Tenerife North, Gran Canaria and La Palma. In 2011, the airport posted 170.225 passengers, 4.674 operations and 135 tons of merchandise.

There are bus runs between the island’s capital and the airport.

At the Airport you will find multi-shops where you can find perfumes and cosmetics, select chocolates, jewellery, textile accessories, tobacco and spirits.

El Hierro, nicknamed Isla del Meridiano, is the smallest and farthest south and west of the Canary Islands, in the Atlantic Ocean off the coast of Africa, with a population of 10,162.