Rental Car Coventry
RentaCarBestPrice.com compare prices from a number of car rental companies and find the best price on car hire. Book with us and get necessary insurance and unlimited mileage included in the price. 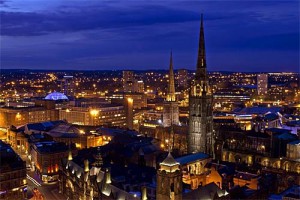 Coventry belong to the county of West Midlands which is centrally located in the southern half of England. Coventry is approx 100 km northwest of the university city of Oxford and over 150 km northwest of the capital London. The city is the ninth largest in England and the eleventh largest in the United Kingdom, and its population was measured at almost 310 000 in 2008.

Lady Godiva, who supposedly rode naked through the town, founded a Benedictine monastery with her husband in 1043. Outside the gates there developed a market which grew into a city. In the Middle Ages, Coventry an important city because of textile production, but much of the old city was destroyed during World War 2. The modern Coventry offers many activities and festivities, including family Festival Godiva Festival and International Jazz Festival.