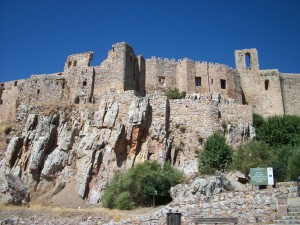 Ciudad Real is a city in Castilla-La Mancha, Spain, with a population of approximately 75,000. It is the capital of the province of Ciudad Real. It has a stop on the AVE high-speed rail line and has begun to grow as a long-distance commuter suburb of Madrid, located 115 miles (185 km) to the north. A high capacity airport (Ciudad Real Central Airport) had been built to serve the city, but closed in 2012, the privately funded airport costs approximately € 1 billion to build. It is now for sale for € 100M plus the payment of developers debt. One of the most popular festivals in the city include La Pandorga, taking place July 30 and 31 .. On the last day of the month the festival honors its patron saint, La Virgen del Prado. The usual attire of participants consists of jeans, a white shirt, and the traditional handkerchief.