Rental Car Calgary
RentaCarBestPrice.com compare prices from a number of car rental companies and find the best price on car rental. All prices on car rentals in Calgary include necessary insurance and unlimited mileage. 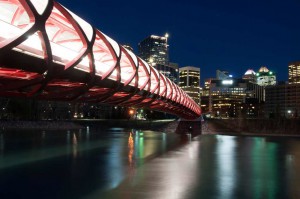 Calgary is a city in the country Canada is to find the far north of North America. Calgary belongs to the province of Alberta with a location in the southwestern part of Canada. The city is the largest in the province with a population of approximately 1.1 million, and including the suburbs got the number up to almost 1.2 million (2009). Calgary is located near the major mountain range Rocky Mountains and near the place where the rivers Bow and Elbow meet.

Calgary is reputed to be an excellent winter resort in terms of its location near the Rocky Mountains and was also the first Canadian city that hosted the Olympic Winter Games in 1988. In addition, Calgary modern city which offers museums, shopping areas and Canada’s second largest zoo. Several festivals are held here each year, including The Folk Music Festival and High Performance Rodeo with entertainment such as music, theater, dance and film.

17 km outside the city lies the airport Calgary International Airport with flights to the US and Europe.