Rental Car Brno
RentaCarBestPrice.com compare prices from a number of car rental companies and find the best price on car rental. All prices on car hire in Brno include necessary insurance and unlimited mileage. 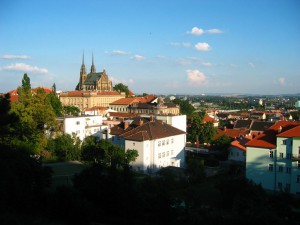 Brno is a southeasterly city in the Czech Republic which lies at the confluence of the rivers Svratka and Svitava. Brno belongs to the province Moravia where it is a commercial and cultural center. This is the largest city in the province and the second largest in the country in terms of population, and in 2008 the population estimated to be about 70 000. Measured area Brno Czech Republic’s third largest city and was founded around the year 1000.

There are many historic buildings in the center in addition to sightseeing, shopping and restaurants. Governor’s Palace is a beautiful building that was erected in the 1700s, and the monastery Capuchin from the 1600s have a much visited crypt with the remains of the former monks. Spilberk Castle is today a museum and was a notorious prison in the 1700s and 1800s. The museum has a location just outside the center. In the zoo Brno Zoo organized the various festivities to celebrate the holidays and births of new animals.

Brno-Tuřany Airport is approximately 10 km outside the city.