Rental Car Brest
RentaCarBestPrice.com compare prices from a number of car rental companies and find the best price on car hire. Book with us and get necessary insurance and unlimited mileage included in the price. 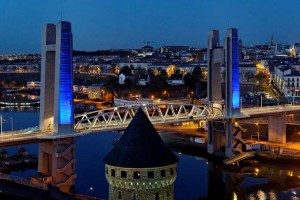 Brest is located in the northwestern part of France – Brittany. The city belongs to the Ministry Ana and has 144,548 inhabitants (2006). Ever since the 1600s there has been a military naval base here. Today it is operated by NATO. Brest is otherwise an important commercial and industrial city.

Among the city’s attractions include Pont de Recouvrance – a vertical hevebro over river Penfeld, built in 1854. It connects the important cultural and historical street Rue de Siam with district Quart Tier the Recouvrance. Of other popular attractions in Brest are also medieval edifices Le Château de Brest and Tour Tanguy. The two monuments located opposite each other on either side of the river Penfeld – and both houses historical museum departments.

Otherwise, the city also has a number of other tourist attractions to offer: The maritime discovery center Océanopolis, the botanical garden Conservatoire botanique national de Brest and the art museum “Musée des Beaux-Art”.

There are several areas near the city with nice beaches that tempt both locals as tourists. Also interesting caves and granite rocks there are here, and in addition to swimming, it also provides activities such as sailing and deep sea fishing.

The nearest airport is Aéroport Brest Bretagne, located just outside the city.

Brest military and maritime history goes back to ancient times, as at the time of the Roman Empire had been a Roman fort in the area. The ninth century, the castle stands, possession of the Earls of León until the thirteenth century, when they happen to belong to the Dukes of Brittany. It was taken by Edward III of England in the fourteenth century and then ceded to John IV of Brittany.

The city receives in the sixteenth century the title of town; but it did not become important until the seventeenth century when Richelieu established there a military port and, above all, thanks to Louis XIV established the first major port of the Royal Navy, “Brest, idea Richelieu, Louis XIV hand.” The port of Brest enjoyed a great traffic in the eighteenth century. Reached its peak with the Industrial Revolution and became the main trading port of the region.

Brest Castle
During World War II the city was largely destroyed and entered a period of decline: its monuments were destroyed, bombed military installations, the Navy has been transferred to the Mediterranean, etc. However, today Brest is one of the three most important cities of Brittany. In fact, facilities are able to receive vessels of all sizes for repair. It also houses the headquarters of the National Center for Exploitation of the Oceans and Oceanography Centre Britain. Finally, the German submarine bases have recovered to install the French nuclear submarine base, one of the safest and most mysterious places on earth.