Rental Car Zittau
RentaCarBestPrice.com compare prices from a number of car rental companies and find the best price on car hire. Book with us and get necessary insurance and unlimited mileage included in the price. 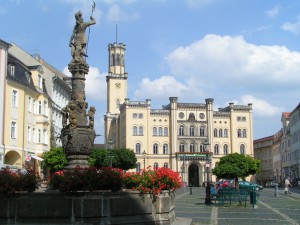 Zittau is located in eastern Germany – in the state of Saxony, close the border with both Poland and the Czech Republic. Only the river Neisse separates Zittau from the Polish towns Sieniawka and Porajów – and the distance to the Czech border is just 3 km. Today Zittau has approx 29,000 residents – which represents a marked decline from the most populous period at that time Germany was split in two. At the most there were then twice as many people here.

There are several notable buildings from the Middle Ages and the Renaissance in Zittau. The most important are Salzhaus / Marstall (1511), Altes Gymnasium (1571), Domspachhaus am Markt (1553) and Heffterbau – which is part of an ancient Franciscan convent from the early 1600s. This is also Kulturhistorisches Museum Franziskanerkloster, where inter alia, can see a collection “Fastentücher” (fixed mesh) from the 1500s.

Several of the city’s beautiful churches have their origins in the Middle Ages, although the later has been subject to major changes / modifications. St. Johannis-Kirche was built in 1291 but burned down and was rebuilt in the 1700s. Also Frauenkirche (listed in 1355) has been ravaged by fire (restored in 1600) – while Weberkirche / Drefaltigkeitskirche, which was originally built ca. 1500 was vigorously rebuilt and expanded in the 1700s.

Nearest international airport is Dresden Airport, located 77 km northwest of Zittau. It may incidentally be noted that also Prague Airport by the Czech capital is in Zittaus Neighborhood – about 95 km south of the city.